Democrats: Now is NOT the time to abandon the Obama coalition!

Any pundit who attempts to comment on our current political climate while ignoring the role of race and racism is simply blind - most likely by their own white privilege. While I have had some issues with his approach lately, Tim Wise nailed it a few years ago when he talked about the current "perfect storm" for white anxiety.

To ignore that is to miss a big part of the picture. The factors Wise outlines are exactly why we are currently living in - as Rev. Barber articulated - a Third Reconstruction. That struggle isn't limited to the battle over voting rights. It is also captured by things like the nativism that has been stirred up over immigration reform and the tension that is building between law enforcement and communities of color (i.e., Ferguson).

Today I woke up to a story about how that is playing out in my own community. Yesterday, the local ABC affiliate in the Twin Cities ran a story titled: Mpls Mayor Flashes Gang Sign with Convicted Felon; Law Enforcement Outraged. 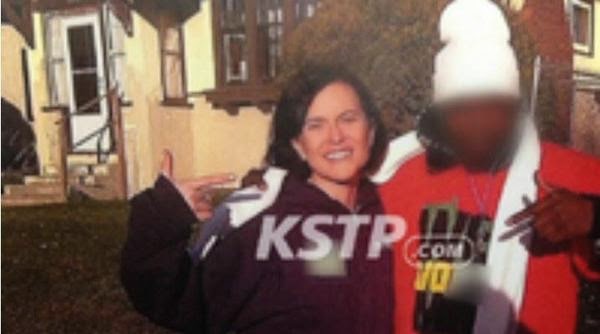 As it turns out - this "convicted felon" is not a gang member, but has a job working as a canvasser for a local GOTV organization while he is on probation. He and the Mayor were celebrating their door-knocking work last weekend by pointing at each other. KSTP (the local ABC affiliate) was quite clear that they based their story on the "outrage" of law enforcement - who just so happen to be fighting the Mayor on the reforms she is proposing to the Minneapolis Police Department to end disparities.

So the back story is that law enforcement thought they could discredit the Mayor by tapping into the racist idea that she is convorting with (black) criminal gang members. One officer in the clip of the newscast that I linked to above even goes so far as to ask "Is she going to support gangs or us?"

But folks are fighting back. If you want to see how, just check out the twitter hashtag #pointergate - the story is going national.

In conclusion, the point I want to make with all of this is that lots of pundits and political strategists are in the process of suggesting that - as a result of the midterm losses - Democrats should abandon Obama's efforts to expand the electorate and instead focus on how they can win support from southern white working class voters. I read that as: "Standing up for civil rights is not going well with white voters, so its time to abandon that one." You can FOR SURE count me out on that idea!!!!
Posted by Nancy LeTourneau