Republicans comparing 2014 midterms to 1966...think about that

Yesterday I was taken back a bit when I saw this tweet from conservative pundit Robert Costa.


To get an idea of what Rumsfeld is celebrating here, lets take a look at some of the history leading up to the 1966 midterms.

The Civil Rights Movement in this country began with the death of Emmett Till in 1955 and the Montgomery Bus Boycott that was launched that same year. It all culminated with the passage of the Civil Rights Act in 1964 and the Voting Rights Act in 1965. Along the way, thousands of black people were killed and/or injured. Most well-known are the Montgomery Church bombing in 1963, the assassination of Medgar Evers the same year, the killing of Goodman, Chaney and Schwerner in 1964, the assassination of Malcolm X in 1965 and of Martin Luther King, Jr. in 1968. Events like Bloody Sunday in Selma, Alabama took place in 1965.

Those are the events that formed the lead-up to the election Rumsfeld is referring to. Certainly protests of the Vietnam War were occurring as well. But they didn't reach their peak until the late 60's/early 70's.

It has been reported that when President Johnson signed the 1964 Civil Rights Act, he told an advisor that the Democrats had lost the south for a generation. It was the midterm elections of 1966 that began that process. Republicans gained 3 Senate seats and 47 House seats. The next presidential election in 1968 looked like this (yellow states went for George Wallace). 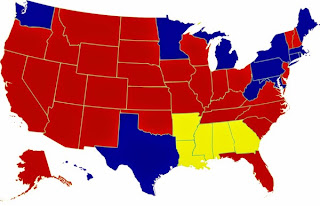 To sum it all up - the midterm election of 1966 was the beginning of the end of the Second Reconstruction. The backlash against Civil Rights gains was the fodder for what Republicans eventually launched as a Southern Strategy.

That Rumsfeld sees a similarity with the midterm results of 2014 is telling. Just so you know, he's not the only one.
Posted by Nancy LeTourneau