The stories we tell: pre-midterm edition

As I've been saying lately, I'm pretty fascinated by the way we create meaning from events by the stories we tell ourselves about those events. So I'd like to take a look at two stories prognosticators are already telling us about what will be "historical" in this election.

First of all, there is Stu Rothenberger - who says that Obama's midterm loss record could make history.


President Barack Obama is about to do what no president has done in the past 50 years: Have two horrible, terrible, awful midterm elections in a row.

In fact, Obama is likely to have the worst midterm numbers of any two-term president going back to Democrat Harry S. Truman.

Notice how this story affirms the Republican narrative that midterms are a reflection on the current president rather than Tip O'Neill's suggestion that "all politics is local."

When it comes to control of the Senate, Speaker O'Neill would have noticed that in this particular midterm, Democrats went into it with the deck stacked against them based on the fact that many of the races involved Democratic incumbents or open seats in solid red states. The "local" nature of this election has always favored Republicans. Hence, initially most pundits predicted a Republican wave.

In light of that, here's the story Sam Wang is telling about the historical nature of this election: In state races, as much suspense as 2006 and 2010 combined. 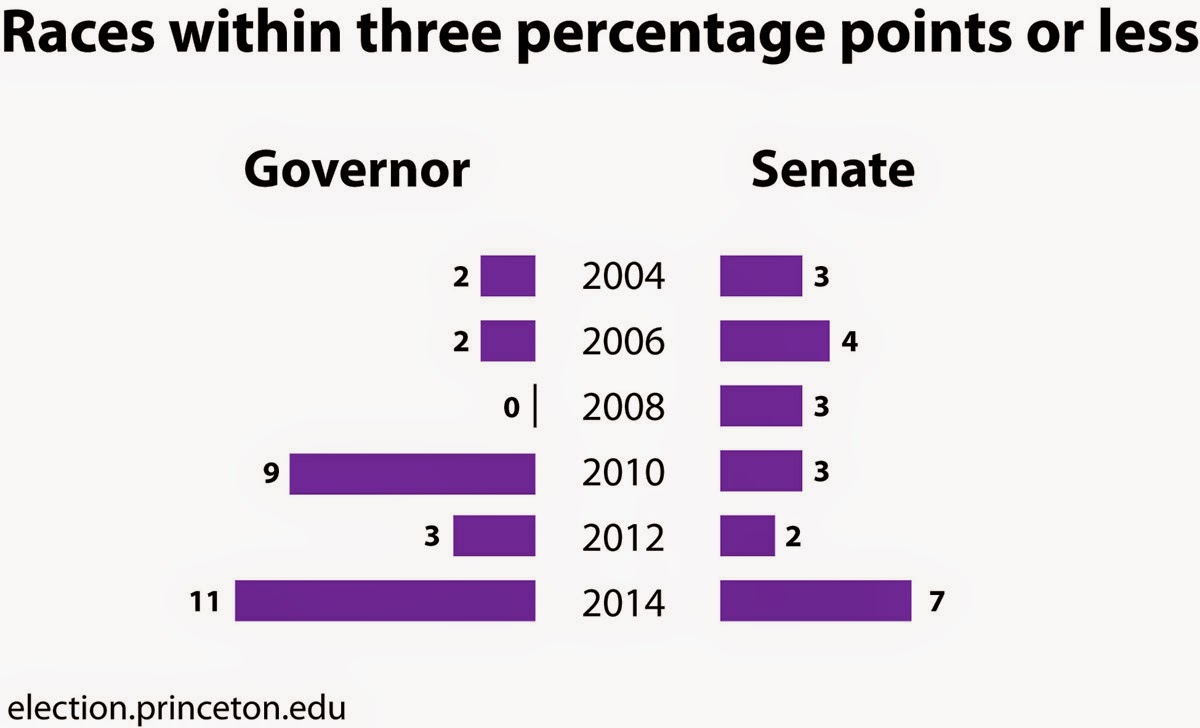 State-level elections in 2014 have the largest number of close races in the last 10 years. This chart shows the number of gubernatorial and Senate races that have been won by three percentage points or less in midterm and Presidential-year elections since 2004. For 2014, the bars indicate races where polling margins are as small. There are 11 close gubernatorial races and 7 close Senate races, totaling 18 in all. This is equal to the last two midterm years, 2006 and 2010, combined.

In other words, an election that favored a Republican wave has turned into the closest election in recent history.

And so - before any ballot is cast - its clear that the meaning of this midterm depends on the story you tell about it. Does it, as Rothernberg suggests, reflect on President Obama's failed leadership?


...is the president at least partially to blame because he failed to show leadership on key issues and never successfully moved to the political center?

Or does it show that - even in a year when the deck is stacked in favor of Republicans - the best they can do is come up with a tie?

It all depends on the story you tell.
Posted by Nancy LeTourneau