"We who believe in freedom cannot rest until it comes"

Over the years I've developed a couple of traditions here at this blog. One of them is to post an excerpt from a wonderful article written by Madman in the Marketplace back in 2006 on Dia de los Muertos (celebrated today and tomorrow). So once again, here it is:

I don't mean just the leaders, not just Elizabeth Cady Stanton, more than Joe Hill, not just Chief Joseph, not merely Martin Luther King Jr. or William Lloyd Garrison or Cesar Chavez. The authoritarians are the ones who have no choice but to elevate "great men" for them to FOLLOW...Our luminaries are only representatives of vast numbers of people most of us might never know by name, unless they were the grandfather who told you stories of old strikes, of meals of crusty toast with chipped beef gravy on top while sitting at his knee. Perhaps another who sat at an old formica kitchen table with tales of the struggle against the Bureau of Indian Affairs and the mission schools, or stories related at family get-togethers of sitting at the back of the bus, grandmothers who remembered having no opportunity to pursue their own dreams because of their gender. Maybe your forebearers told stories of shame and having to hide who they loved, or the pressure to hide the fruits of having loved, of being spirited away to give birth in shame.

THIS Dia De Los Muertos, remember their struggles, but remember their COMMUNITY. Remember that unlike the right, unlike the worshippers of division and death, we can look back with joy and fondness at people who sang and danced and loved and communed DESPITE their struggles, despite the exploitation, the hatred, the discrimination and fear. They formed communities, they formed unions, they formed sewing circles and barn raisings and volunteer organizations. They rallied with their neighbors, mended fences, found common ground with NEW neighbors different from themselves. It's easy to remember the nativists, the klansmen, the misogynists and gay bashers and jingoists and bundists ... but also remember that there were ALWAYS good people opposing them, forging bonds, talking and working together to build a brighter, broader, more inclusive future. While there were slavers, there were abolitionists. When other men jeered and sniped, remember there were women who reminded others that a woman was every bit the equal of a man and should have a voice, and there were sons who listened to them.

Celebrate the artists, the writers, the musicians and performers who forged bonds between different groups of people, who showed us all that it's okay to be different, that different can be wonderful and exciting. Remember that every time that culture tried to expand our ties, broaden our conversations, help us see the world anew, the authoritarian minded tried to silence them, ban them, attack them, but over time the artists prevailed. From the churches and the juke joints, the beer halls and the smokey bars, from the salons to the corner table at the Algonquin, from coffee houses to underground clubs ... we can remember fondly those who found beauty and strength in the everyday and in the sublime and IN EACH OTHER. THIS Dia De Los Muertos, read their words, sing their songs, dance to their tunes, enjoy their paintings and sculptures and their videos. Remember that no matter how loudly, how violently, how insistently those afraid of openness and sharing and difference and change tried to stop it, the songs got sung, the rugs got cut, the words got read.

I can think of no better person to celebrate on this Dia de los Muertos than Ella Baker. Like our current President, she exhibited a "shocking, almost certifiable faith in humanity." 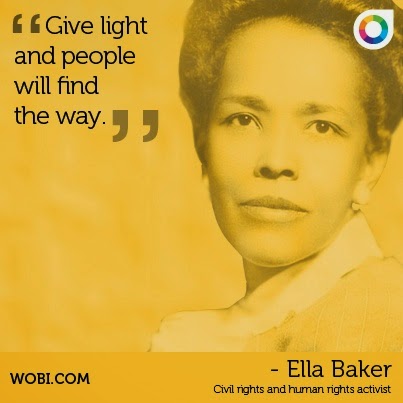 Some of her wisdom has been captured by Sweet Honey in the Rock. Its all SOOO incredibly timely!

Email ThisBlogThis!Share to TwitterShare to FacebookShare to Pinterest
Labels: Storytelling