To remind us of some of the challenges faced by those who eventually prevailed in their march from Selma to Montgomery on behalf of voting rights, President Obama said this:


As we commemorate their achievement, we are well-served to remember that at the time of the marches, many in power condemned rather than praised them. Back then, they were called Communists, or half-breeds, or outside agitators, sexual and moral degenerates, and worse –- they were called everything but the name their parents gave them. Their faith was questioned. Their lives were threatened. Their patriotism challenged.

In case anyone has been fooled by the attempts of our current segregationists to appropriate the legacy of Martin Luther King, Jr., here's evidence that Obama is right. 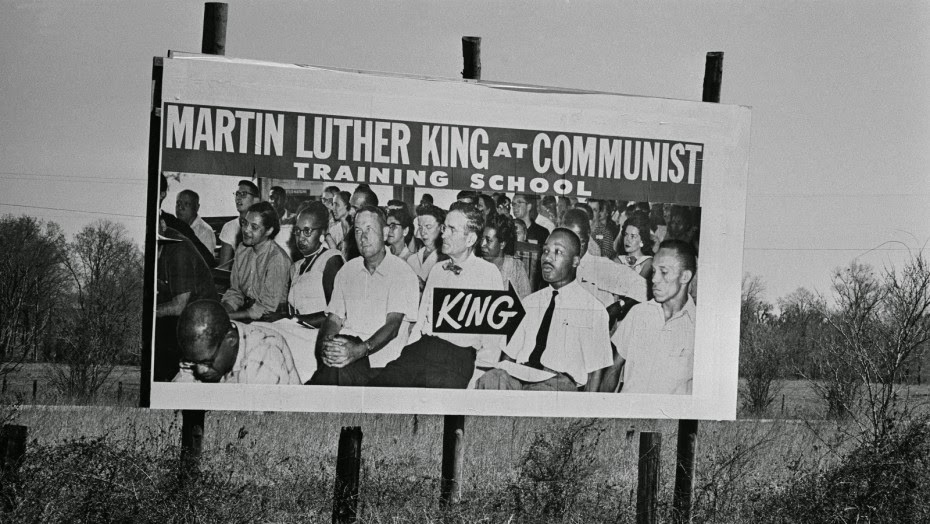 March 25, 1965: A large poster purporting to show Dr. King at a communist training school stands along the route of the ongoing march.(William Lovelace/Getty Images)

Regular readers here might recognize that photo (minus the label) as one of several taken at the Highlander Folk School where both Dr. King and Rosa Parks (fourth from Dr. King's right) were trained prior to the 1955 Montgomery Bus Boycott.

Today we hear conservatives claim that President Obama is a Kenyan Socialist trained by Saul Alinsky who really doesn't love this country. It all reminds me that some things never change. Trust Molly Ivins to find some comfort in that.


Things are not getting worse; things have always been this bad. Nothing is more consoling than the long perspective of history. It will perk you up no end to go back and read the works of progressives past. You will learn therein that things back then were also terrible, and what's more, they were always getting worse. This is most inspiriting.