Ed Kilgore has an interesting article in the latest edition of the Washington Monthly about what we might call the "Palinization of the Republican Party."


St. Joan of the Tundra’s distinctive contribution to the conservative cause was not simply to serve as a lightning rod for resentment of the “liberal elites” that supposedly run the country, but to invite ridicule that she then turned into a sense of victimization and self-pity and a hankering for vengeance.

Does anyone else notice the circularity of that process? First of all, you invite ridicule. A prime example would be the invention of the notorious "War on Christmas." When your opponent reacts as expected, you claim victimhood and put out the call for vengeance - thus ensuring another round.

Back in 1968 Stephen Karpman, M.D. came up with a name for this pattern. He called it the Drama Triangle. 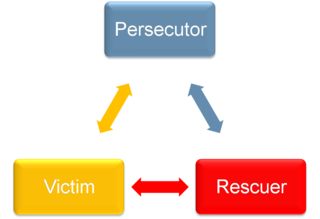 Unlike theories about personality preferences, this one has always made more sense to me as a world view rather than a description of different styles. In other words, either one sees the world as made up of victims, persecutors and rescuers - or not. Once someone adopts this world view, they join the triangle and define both their own actions and those of others via these three options.

The one thing these three roles are designed to avoid is any sense of personal responsibility. The victim is the helpless target of both the persecutor and rescuer. The persecutor blames everyone else for their circumstances. And the rescuer is there to protect the victim from the persecutor. The reason Karpman called it a Drama Triangle is because this way of interacting produces a lot of heat, but no light.

It is within this frame that conservatives couch their attacks (the persecutor) against women's rights, civil rights, LGBT rights, the social safety net, etc. from a position of victimization. The conversation for them is never about marriage equality for LGBT. It's about how gay marriage makes them victims. Those who promote gay rights are therefore cast in the role of persecutors. And that enables conservatives to become the persecutors of gay rights activists. Do you see the endless drama?

In some iterations of the Drama Triangle, the rescuer is called the "savior" - which might give you some clue as to how that role is often filled by the religious right. But in the end, defining oneself (or others) as victims immediately triggers the need for rescue since victims are powerless to do anything for themselves. Attempting to rescue others then becomes a way to avoid taking responsibility for oneself.

The mistake liberals make too often is to join the drama triangle rather than avoid this dance altogether. The kryptonite to drama is personal power/responsibility. We have choices about when/how to react or to not react at all. Similarly, we can reject a knee-jerk attempt to blame others (being the persecutor) and refuse to see ourselves as the helpless victims of Republican antics. Finally, we can empower those who are affected, rather than assume they need to be rescued by us.

Remember in 2008 when the President and his campaign were dubbed "No Drama Obama?" That's precisely because they refused to play this game. While they were willing to take issues head-on, they avoided playing the role of perpetrator and never allowed themselves to be the victims of other's attacks. Here's Barack Obama basically giving what amounts to a master class in how to avoid the drama triangle in under a minute.