It's Not Sexist, Just Irrelevant

I'm going to be brutally honest here. If the press were to have written this about Hillary Clinton instead of Jeb Bush, you could bet your last dollar that there are folks who would be screaming "SEXIST!!!"


Jeb Bush is eating like a caveman, and he has literally shrunk in size.

The former Florida governor, expected to seek the Republican presidential nomination in 2016, is on the popular Paleo diet, which is based on what are believed to be the eating habits of the Paleolithic hunters and gatherers.

For Paleo practitioners, lean meat and fruits and vegetables are in and processed foods, dairy products and sugary delights are out.

For Bush, the results have been noticeable. Late last year he was something of a pudgy doughboy with a full face and soft jawline. Today the 6-foot, 4-inch-tall Bush sports a more chiseled look. His campaign-in-waiting would not say how much he had lost, but he looks to have shed 20 or 30 pounds.

Of course, all the stuff about a caveman diet from hunters and gatherers makes it sound like a much more "manly" thing to do. And going from "doughboy" to "chiseled look" is nothing any man would sneeze at. But perhaps - from the photo they included - it's a bit over-the-top. Does that one on the right say "chiseled" to you? 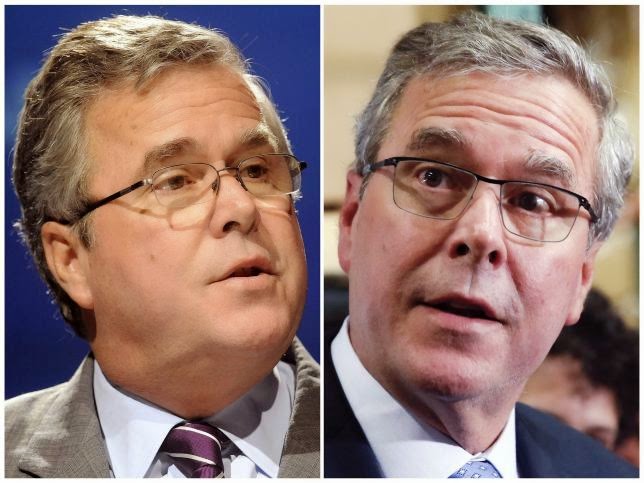 But you see, now they've got me doing it. My original point was that - minus all the attempts to masculinize the story - if someone had written something similar about Hillary, we'd all be pouncing on it as an example of how women are treated differently.

The truth is that an awful lot of what the press does when they get so addicted to the silly season of campaigns more than a year and a half before an election, is fill space with tons of irrelevant information and try to convince us that it's important. The latest edition in Hillaryworld is that she apparently flew first class back to Washington D.C. Really!!! How could she?!!

I've joked with some of my friends that I'm going to literally lose my mind before all of this is over. I just keep reminding myself to ignore what's irrelevant. With Hillary as the likely Democratic nominee, that will mean being able to distinguish sexist from irrelevant.
at April 22, 2015