I've made the case previously that the turn-around of the Civil Rights Division at DOJ after it was politicized and decimated by the George W. Bush administration is one of President Obama's most unsung accomplishments. Initially, the President and AG Holder appointed Thomas Perez to head that division. When he became the Secretary of Labor, Debo Adegbile was nominated to be his successor. You might remember that his nomination was derailed when the Fraternal Order of Police objected because he had worked as part of a legal team on Mumia Abu-Jamal’s appeal. Since then, the position has technically been vacant.

But pay attention to that word "technically." Because the "acting" director is a woman named Vanita Gupta. 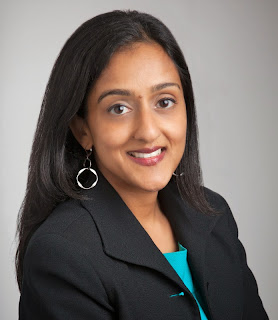 Prior to working at the Department of Justice, Gupta worked for the NAACP Legal Defense Fund and then for the ACLU's Center for Justice. Of particular note is that in her very first case at the NAACP she successfully led the effort to overturn the wrongful drug convictions of 38 defendants in Tulia, Texas (you'll see her at 0:35 in this trailer for a documentary about what happened).


That is all by way of introduction to the fact that this week Gupta gave a powerful speech on police and justice reform to the Colorado Lawyers Committee Annual Lunch. First of all, here's how she defines the problem.


In the seven months I have been at the Civil Rights Division, I have spent a lot of time with local leaders and community members in cities all across America, including with numerous mothers who have lost their children in officer-involved shootings. The pain, anger, frustration—the lack of trust in the police—is real, and it is profound.

Again and again, people have told me that young people are losing faith in our justice system and view law enforcement as preying on them rather than protecting their loved ones. They talk about how the police don’t value their rights, or indeed, their lives. They talk about being tired of being viewed as criminals first, human beings second.

But Gupta absolutely GOES THERE when she addresses the question of how we got here.


Mistrust can’t be explained away as the kneejerk reaction of the ill-informed or the hyperbolic. It’s in part the product of historical awareness about the role that police have played in enforcing and perpetuating slavery, the Black Codes, lynchings and Jim Crow segregation. As FBI Director James Comey noted, “At many points in American history, law enforcement enforced the status quo, a status quo that was often brutally unfair to disfavored groups.”

It is also the product of lived experience, of negative interactions that individuals — or their family members, friends, or neighbors — have had with law enforcement. Something as quietly humiliating as being mistreated during a traffic stop, or being followed in a retail store. These stories can circulate through a neighborhood — or these days, across the nation via the web and social media — and they can build up over time into a painful narrative that divides community members and police.

The lack of trust also undeniably results from our criminal justice policies over the last few decades, and the concentrated impact they have had on communities of color and people living in poverty. Law enforcement practices such as the stopping and frisking of young black men based on stereotypes. Sentencing policies that result in mass incarceration, particularly of people of color. And the devastating consequences that convictions have had on individuals’ ability to find work, secure stable housing and reintegrate as full members of society. These are deliberate policy choices that we made over the last several decades. We bear the responsibility to confront their consequences.

Gupta goes on to recount the work the Civil Rights Division is doing on police reform. During this administration they have:
She ends by describing the collaborative approach the Civil Rights Division takes to these agreements by working with community members, police officers and political leaders.
Due to the old newsroom axiom of "if it bleeds, it leads," we usually only hear stories about public servants when something goes wrong. But if the best way to promote a liberal agenda is government that works, Ms. Gupta is one of our best champions.
at May 20, 2015