Listening to the Young People of Baltimore 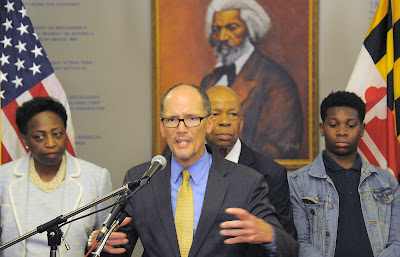 By now I'm sure you know that on Tuesday, Attorney General Loretta Lynch traveled to Baltimore. The media did a pretty good job of covering that story. But I wonder if you've heard about this:

Perez said he and other federal officials went to Douglass to listen to students whose school was in the heart of the violence that broke out at nearby Mondawmin Mall last week and spilled into rioting and looting across the city...

Joining Perez and Duncan was Cabinet Secretary Broderick Johnson, a Baltimore native whose parents graduated from Douglass in 1955.

The officials held roundtable sessions with students throughout the day. The sessions were closed to reporters.

This is quite extraordinary. While it's important to connect with city officials as well as community/church/business leaders in Baltimore in order to form lasting solutions to the challenges the city faces, it is incredibly powerful to think that three members of the President's Cabinet spent a day listening to the concerns of high school students.

When Broderick Johnson said the other day that it's all about "recognizing that our young people are not the problem, but rather the solution,” it wasn't just a nice soundbite. This is how the Obama administration demonstrates that they're walking their talk.
at May 07, 2015