News Flash: Jeb Bush says former President George Bush knows he made mistakes in Iraq. Too bad it's his brother who had to tell us.

Does anyone else think this means that the New Jersey Governor isn't going to run for president in 2016? Chris Christie: "Global Warming Is Real."

The New York Times Editorial Board nails it with: How Racism Doomed Baltimore.

One of the most fascinating reads of the day comes from Nomadic Politics: The Surprising Connections You Might Not Know Between Religion and Income Inequality. To give you a taste, here's one of the surprises:


In other words, in economically skewed societies, both the rich and the poor are more religious. In fact, they found that, for nearly all of the measures of religiosity, when societies are more unequal, the richer people become more religious than the poorer people.

For Mother's Day, Brian Resnick and Nora Kelly at the National Journal asked 24 politicians to share the best political advice they got from their Moms. I'm guessing that Sen. Schumer didn't have this one cross-stitched on a pillow. 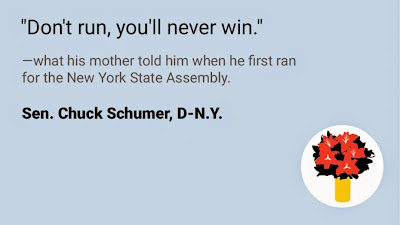