The Problem or the Solution? 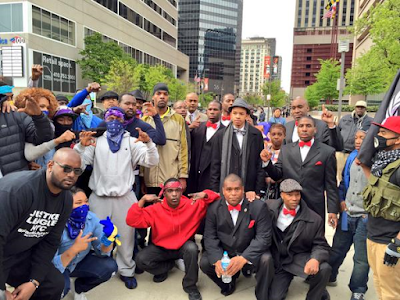 On Monday, President Obama went to New York for the launch of the My Brother's Keeper Alliance, and independent non-profit extension of his White House initiative. Broderick Johnson, chair of the latter, said this:


“The President’s My Brother’s Keeper Initiative is about recognizing that our young people are not the problem, but rather the solution.”

That's a pretty good description of some of the articles I've been reading about the truce that has developed between rival gang members in Baltimore. For example, Amy K. Nelson uses the money quote from one of the gang members as her title: We Ain't Choosing No Sides; We Just Choosing Our Side. She spent a couple of days talking to and observing what is going on - including attending a meeting of gang members with a minister and their interview with Larry Wilmore.


“We got to keep pushing,” Goldie tells me, with Crips, Bloods, and BGF members standing behind him. “We got to, because if we don’t, all this shit gonna be for nothing.”

A few minutes later, four of the OGs — Goldie included — from each gang gathered in the middle of the intersection, blocking traffic. They tied their black, blue, and red bandanas together and lifted them as a swarm of cameras engulfed.

“From now on, Bloods, Crips, BGF we gonna control our own neighborhood we don’t need the police,” said an OG named Bigg Wolfe, “it’s our job from the beginning. We gonna sleep or own patrols it’s our own movement and if you ain’t with it that’s your issue. Bloods, Crips, BGF, man.”...

Amid the blaring horns, jubilant celebration, and happy chaos, a TV reporter in the scrum tells the OGs she sees that they’re linked arm in arm, and asks how did they got to this point. They don’t hesitate.

Reading that quote from Bigg Wolfe about controlling their own neighborhood brings to mind the original reason the Black Panthers were formed. As Suzy Khimm points out in her article about these developments, the Crips gang was actually an outgrowth of the Black Panthers. So if these young men can hold it together, they have the potential to bring that whole movement back full circle.

I'm not going to be naive about all of this. To the extent these young men mean what they're saying, it will be a long hard road and there will be forces that will do anything they can to derail them (from my own experience, that will include some Baltimore Police Officers).

But the other thing I know is that as long as they see each other as the enemy, they cast themselves as part of the problem. When/if they come together in solidarity to take on the forces of racism and injustice that are the true enemy, they'll be the most powerful part of the solution.

The challenge for the rest of us will be whether or not we have a vested interest in seeing these young men as the problem, or if we can conjure up the vision to see them as the solution.
at May 04, 2015