What We Can/Can't Learn From President Obama's Jump in Favorability 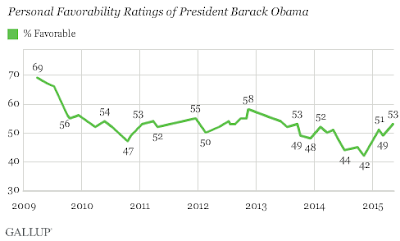 It is important to distinguish this from the President's job approval rating. Here's what Gallup says about that.

But what is even more interesting is to take a look at the recent results by party affiliation. 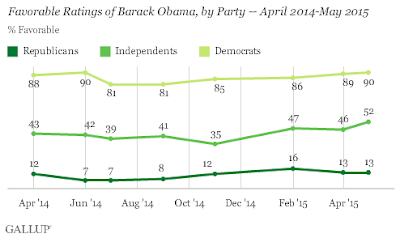 As you can see, there has been almost no change in the President's favorability rating with Republicans and Democrats. Most all of the change has come from Independents - with an increase of 6% in the last month.

What you will always hear from political scientists is that it is not helpful to look at the results of one poll. If I were to suggest that President Obama's favorability rating now stands at 53%, that would be the mistake they are warning against.

But there is something we can take from one poll. If the pollster uses the exact same methodology, the trend lines over time are reliable. So what we can learn from Gallup today is that President Obama's favorability is holding steady with Democrats and increasing pretty significantly with Independents.

The context for all that is interesting to note. Over the last few weeks, the news stories about the President have mainly zeroed in on the disagreement he's having with some Democrats (i.e., Senators Warren, Brown and Sanders) over trade policy. It sure looks to me like Democrats are giving that one a big ol' "meh," while Independents might be liking what they see.
at May 21, 2015