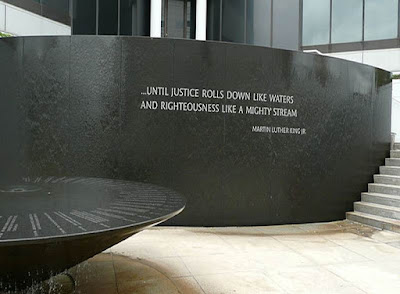 That is a picture of the Civil Rights Memorial at the Southern Poverty Law Center in Montgomery, AL. In the background is a paraphrase from the book of Amos that was used by Dr. Martin Luther King, Jr. in his "I Have a Dream" speech at the beginning of the Montgomery Bus Boycott: "...Until justice rolls down like waters and righteousness like a mighty stream."

I'm thinking about that quote as I continue to contemplate the shooting at the Emanuel A.M.E. Church in Charleston, SC. Will the prosecution and conviction of the shooter - Dylann Storm Roof - bring justice?

It's hard not to think of the tie that binds this event to the bombing of the Sixteenth Street Baptist Church 52 years ago in Birmingham that killed four little girls. Dr. Martin Luther King, Jr. spoke that their memorial and had a much bigger view of what justice requires. He talked about the message we should hear from those four little girls.

Whoah, he got up in everybody's business there, didn't he? Preachers, politicians, Dixiecrats, Republicans, black and white. All of us got called out. And while he acknowledged that we should be concerned with those who murdered innocent people, he cautioned us against thinking that is what would bring justice. To do that, we all have to play our part in changing the "system, the way of life, the philosophy which produced the murderers."

That's exactly why I wrote earlier about how we learn to hate/fear. The system that produced Dylann Storm Roof will survive the justice meted out to him personally. And it will continue to result in everything from dog whistle racism to the killing of innocent people until we make changing it our priority. Our criminal justice system hasn't figured out a way to tackle that one yet. And so it's up to each of us. Everyone has a role to play. That is our task. And it will continue..."until justice rolls down like waters."
at June 18, 2015