All Their Hopes for Civil Disobedience are Dashed

When it comes to rhetorically nailing something, no one is better at it than Barney Frank.


In the spirit of conciliation, I want to offer reassurance to those who reacted to the Supreme Court’s same-sex marriage decision with a mix of outrage and horror: It will have no effect on how you live your lives.

This is not a prediction of what will happen in the future. It is a distillation of the nearly 12 years of experience in Massachusetts since our Supreme Judicial Court issued the forerunner of this ruling in 2003. No member of the clergy has had to participate in any marriage she or he found sinful, immoral or even offensive. No house of worship has been forced to open any of its premises – sanctuaries, function halls or, as much as I can ascertain, even parking lots – for ceremonies that contravene their religious tenets.

Opposite-sex marriages have proceeded just as they did in 2002 and before, and the divorce rate has not spiraled. There has been no movement toward legalizing polygamy nor to provide legal sanction to incestuous relationships.

Musical groups have retained fully the right to decide at which celebrations they will perform, and bakers who refuse to decorate cakes with depictions of sexual activity have been under no obligation to change this policy. Contrary to some hysterical expressions of concern, for Massachusetts heterosexuals the “institution of marriage” has not been diminished, unsettled or changed in any way whatsoever by my marrying Jim. 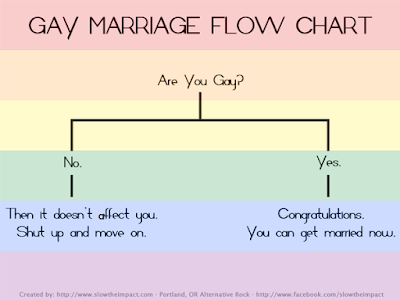 You really should go read the whole article by Frank. Here's how he ends it:


I close with a very confident prediction. Within a very few years, if that long, the people now obsessing over the damage they expect from the Supreme Court’s decision will be in severe danger of getting over it.