Jackie Calmes has written a paper for the Shorenstein Center titled: They Don't Give a Damn About Governing: Conservative Media's Influence on the Republican Party.


If leaders of the Republican Party are not setting its agenda, who is?

As many of them concede, it is conservative media – not just talk-show celebrities Rush Limbaugh, Sean Hannity, Mark Levin and Laura Ingraham, but also lesser-known talkers like Steve Deace, and an expanding web of “news” sites and social media outlets with financial and ideological alliances with far-right anti-government, anti-establishment groups like Heritage Action, Americans for Prosperity, Club for Growth and FreedomWorks. Once allied with but now increasingly hostile to the Republican hierarchy, conservative media is shaping the party’s agenda in ways that are impeding Republicans’ ability to govern and to win presidential elections. “These people, practically speaking, are preventing the Republican Party from governing, which means they’re really preventing it from becoming a presidential party as well,” said Geoffrey Kabaservice, author of Rule and Ruin: The Downfall of Moderation and the Destruction of the Republican Party, from Eisenhower to the Tea Party, and himself a Republican.

I'm not sure this is a huge revelation to anyone. But what is most interesting is that her research was sparked by a conversation with former Senator Trent Lott and even though many refused to go on record, the complaints about conservative media came almost exclusively from Republican leaders.

For most of us, it's hard to be very sympathetic to their complaints when "party leaders" kicked this whole thing into high gear by doing things like this... 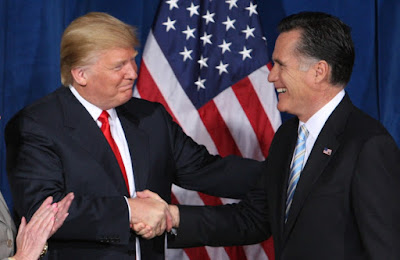 Five years ago Republican David Frum warned them about what they were doing.


I’ve been on a soapbox for months now about the harm that our overheated talk is doing to us. Yes it mobilizes supporters – but by mobilizing them with hysterical accusations and pseudo-information, overheated talk has made it impossible for representatives to represent and elected leaders to lead. The real leaders are on TV and radio, and they have very different imperatives from people in government. Talk radio thrives on confrontation and recrimination. When Rush Limbaugh said that he wanted President Obama to fail, he was intelligently explaining his own interests. What he omitted to say – but what is equally true – is that he also wants Republicans to fail. If Republicans succeed – if they govern successfully in office and negotiate attractive compromises out of office – Rush’s listeners get less angry. And if they are less angry, they listen to the radio less, and hear fewer ads for Sleepnumber beds.

President Obama practically begged Republicans in Congress to work with him on things like health care reform and a Grand Bargain to reduce deficits. He went so far in making concessions to elicit their cooperation that an awful lot of liberals still haven't forgiven him for it. But Republican leaders went with the escalated rhetoric of conservative media and said "no."

So now they want to complain (in whispers behind closed doors) that they have lost control of the agenda to a conservative media that doesn't give a damn about governing. Playing the victim card on this one is definitely NOT a good look for them.
at July 28, 2015