With the successful conclusion of negotiations with Iran over their nuclear weapons program, it's a good time to revisit the idea of an Obama Doctrine in foreign affairs.

When candidate Obama was running for president he was perfectly clear that he wasn't against all wars, just dumb wars. He has consistently said that when/if America is directly threatened/attacked, he will not hesitate to defend the country militarily. Fortunately, other than dismantling the perpetrators of 9/11, that situation has not presented itself and our ground troops are no longer involved in military actions in Iraq or Afghanistan.

At the time the President decided to join the coalition involved in military intervention in Libya, some people began to describe the Obama Doctrine as "leading from behind." There is some truth to that characterization. In combating ISIS, President Obama has been very clear: 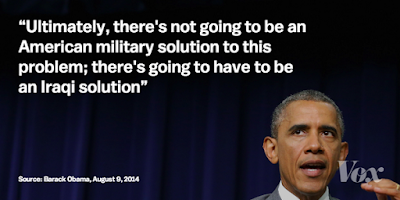 But when it comes to his broader response to foreign policy issues, "leading from behind" is an insufficient description of the President's approach. Instead, we have consistently seen him lead from the front based on the following three principles.

First of all, he bases his reaction on international laws, principles and ideals. This is where so many people misjudged his intentions in Syria. As we saw, he routinely rejected the advise of many (including those in his cabinet) to get involved militarily in that country's civil war. The pragmatist in him knows there's no workable solution there. But when Assad used chemical weapons against his own people, it was a serious breach of international law. That was the basis for his attempts to rally the international community to respond. When Putin realized that the President was serious, he counseled his ally Assad to give up those chemical weapons.

When it comes to the situation in Ukraine, here's how President Obama articulated that during his speech in Brussels last year:


...our enduring strength is also reflected in our respect for an international system that protects the rights of both nations and people -- a United Nations and a Universal Declaration of Human Rights, international law and the means to enforce those laws.

But we also know that those rules are not self-executing.

They depend on people and nations of good will continually affirming them.

And that’s why Russia’s violation of international law, its assault on Ukraine’s sovereignty and territorial integrity, must be met with condemnation, not because we’re trying to keep Russia down, but because the principles that have meant so much to Europe and the world must be lifted up.

Secondly, when it comes to a strategy to uphold those international laws and principles, President Obama continually affirms the power of partnership. Whether it involves military action to stop a genocide in Libya or economic sanctions that bring Iran to the negotiating table, President Obama has taken the lead in bringing the weight of a united global community to bear on the offenders of international norms. As he said in Cairo, that is a strategy particularly suited to our interconnectedness in the 21st century.

Thirdly, as the weight of global pressure mounts on the offenders of international law, President Obama continually affirms that it is in their own best interests to change course. In other words, he always offers a way out. Here's how he talked about that with respect to the negotiations with Iran.

And here is how he described the message to Russia.


But with time, so long as we remain united, the Russian people will recognize that they cannot achieve the security, prosperity and the status that they seek through brute force.

And that’s why throughout this crisis we will combine our substantial pressure on Russia with an open door for diplomacy.

I believe that for both Ukraine and Russia, a stable peace will come through de-escalation, a direct dialogue between Russia and the government of Ukraine and the international community, monitors who can ensure that the rights of all Ukrainians are protected, a process of constitutional reform within Ukraine and free and fair elections this spring.

Those three principles encompass the Obama Doctrine as it relates to U.S. involvement in global affairs. It is a complete rejection of the isolation espoused by libertarians and the reliance on military dominance of the neocons. In other words, it is a strong, principled foreign policy that has now been proven to produce results.
at July 19, 2015