Claims of "Political Correctness" as Cover for Lies

If you are struggling to understand Donald Trump's appeal to Republican voters, this pretty much sums it up: 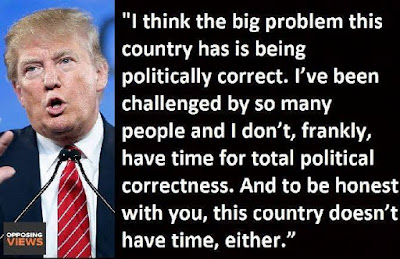 Benjy Sarlin interviewed Trump supporters at the Red State gathering and this guy carries on the theme.


“We need drastic change,” Jack Staver, 61, told msnbc on Thursday. “He may not be the right guy, but others need to adopt his attitude and stop being politically correct.”

So, you see, when Trump says that Mexicans in this country are rapists and criminals, or that police need to have more power because of the tremendous crime wave that's happening, or insinuates that soldiers who are captured during war are not real heroes, the pushback he gets for saying things that are demonstrably false is simply a matter of demanding political correctness.

Here's how that always plays out:

1. Candidate says something that is not only untrue, but extremely inflammatory.
2. Reporter challenges them on the facts.
3. Candidate claims you are demanding political correctness.

One of the reasons Ben Carson continues to get traction as a candidate is that he's doing exactly the same thing - he's simply not as bombastic as Trump about it. For example, there's this:

In response to the Breitbart interviewer’s question about what Carson means when he says Americans are living in a “gestapo age,” Carson said, “I mean, very much like Nazi Germany –and I know you’re not supposed to say Nazi Germany but I don’t care about political correctness – you know, you had a government using its tools to intimidate the population.”

According to Carson, this "Nazi-like" political correctness comes into play when you challenge him to back up his claim that Obamacare is the worst thing to happen to America since slavery or when he compares our Founding Father's to ISIS.

What's interesting is to watch two men who have never held public office run for president on a platform suggesting that political correctness is so powerful in this country that it stifles engagement. Anyone else see the irony in that?

So what's going on here? They are right to notice that both our country and the world are changing. That scares a lot of people. But it doesn't mean that you get to tell lies. And when someone decides to run for president, you can expect people to challenge you when you do. That has nothing even remotely to do with political correctness. It has to do with holding people accountable for what they say.

Suggesting that anyone is demanding political correctness is actually a way to stifle dissent. As has been demonstrated by these Republican candidates, people are free to say whatever they want. But freedom of speech also applies to those who disagree. You can't shut that down by simply crying about political correctness.
Posted by Nancy LeTourneau