Hamilton: A New Look at Our "Founding Fathers" 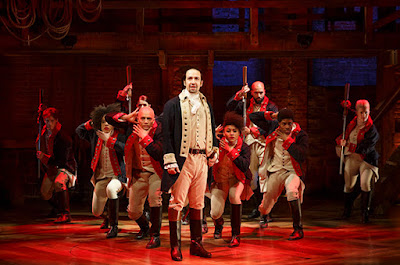 I have to admit to taking a certain amount of pleasure in the fact that - as tea partiers attempt to appropriate our "Founding Fathers" in support of their current political aspirations - the biggest thing on Broadway is a hip-hop musical in which Black and Brown Americans portray the lead characters in our country's origins.

Have you heard the buzz about Hamilton? If not, here's how Chris Hayes introduces his interview with its creator, Lin-Manuel Miranda.


Six years ago, Lin-Manuel Miranda was invited to perform during an evening of song and poetry at the White House. The writer, composer and performer was fresh off of a Tony Award win for In the Heights, his debut hip-hop- and salsa-inflected coming-of-age musical about life in the working-class Manhattan neighborhood of Washington Heights. But instead of doing something from that show, he debuted a rap about Alexander Hamilton, inspired by Ron Chernow’s landmark biography. Miranda introduced the number by saying that the life of the orphaned, immigrant, obsessively verbal Hamilton “embodies hip-hop,” pointing to the fact that he “caught beef” with every other Founding Father. The room chuckled at first, but by about four bars in, it was clear that Miranda had channeled something both completely new and utterly classic. The song was a masterpiece in miniature. A cutaway camera caught President Barack Obama smiling and nodding his head to the beat.

Six years later, that song has become Hamilton on Broadway. The two-act musical, written by and starring Miranda, opens with that same tune, nearly unchanged, now performed by a dazzling cast almost entirely made up of performers of color in period costume. The show is, from start to finish, a revelation, easily the most celebrated and anticipated new musical in a generation. It is destined to immediately enter the canon of American theater, indeed of American art, cannily revealing how much -- and how little -- has changed in America since its founding, from political campaigning to debates on immigration to the role of the United States abroad.

Here's a video of that initial White House performance.


Patrick Healy suggests a connection between Hamilton's Broadway opening and the first Republican debate of the 2016 campaign season.


How fitting that the Republican presidential candidates will hold their first debate this Thursday on the same night as the Broadway opening of “Hamilton,” the groundbreaking new musical about the founding fathers. At a time when so many American politicians are sanitized, cautious, even boring, the characters on the debate stage and the Broadway stage are remarkably in sync: brazen, unpredictable, even outrageous.

But the similarities come to a pretty quick halt.


Like the Republican candidates now positioning themselves as unwavering opponents of President Obama, decrying his nuclear deal with Iran and his diplomatic opening to Cuba, characters in “Hamilton” stake out unyielding positions against their political enemies during the drafting of the Constitution and early in Washington’s presidency. But the art of compromise eventually becomes a focal point for the creator of “Hamilton,” Lin-Manuel Miranda, a close student of politics as the son of a Puerto Rican immigrant who became a powerful Democratic strategist in New York.

Ron Chernow, whose biography of Hamilton inspired the musical, said that compromise was the timeliest theme in the musical. “What Lin is showing is that it’s very easy when you’re in the political opposition to take extreme ideological positions, but when you’re dealing with real power, you have to engage in messy realities and compromises to move forward,” Mr. Chernow said.

Oh, that the Republicans would learn something from that truth about our Founding Fathers!
Posted by Nancy LeTourneau