Inequality Starts in the Crib

One of the ways our new breed of "data journalists" tries to sell their wares is via headlines that say, "This Chart Explains Everything!" Although I am one who values data, that kind of thing tends to make me skeptical.

But I have to say that this chart - while it might not explain everything about income inequality - is a bit of a show-stopper nonetheless. 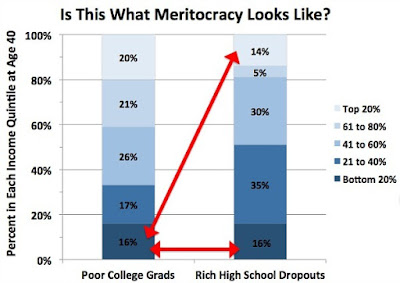 Here's how Matt O'Brien describes it.


Even poor kids who do everything right don't do much better than rich kids who do everything wrong. Advantages and disadvantages, in other words, tend to perpetuate themselves. You can see that in the above chart, based on a new paper from Richard Reeves and Isabel Sawhill, presented at the Federal Reserve Bank of Boston's annual conference, which is underway.

Specifically, rich high school dropouts remain in the top about as much as poor college grads stay stuck in the bottom — 14 versus 16 percent, respectively. Not only that, but these low-income strivers are just as likely to end up in the bottom as these wealthy ne'er-do-wells. Some meritocracy.

From there it's hard to draw too many conclusions without more data...except that until we figure this one out, inequality will continue to start in the crib.
Posted by Nancy LeTourneau