Ed Kilgore is right to be...um..."skeptical" that Peggy Noonan has tapped into some great Latino love for Donald Trump. She found one Dominican who suggested that legal immigrants are just as angry as everyone else is at illegal immigrants. She believes him because that's what she wants to believe.

But I'll give you one good reason why most brown people (Latino as well as other nationalities) in this country are terrified of what Donald Trump is saying he would do. It's because some of them (and a few of us) remember what happened the last time a Republican president decided to round up a bunch of illegal immigrants and ship them home. We remember because it wasn't that long ago. 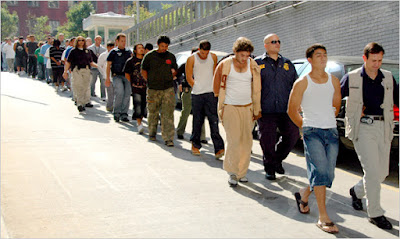 Here's what happened when ICE raided Howard Industries in Laurel, MS in 2008.


ICE´s approach humiliated all Latino workers in the plant with their Racial Profiling. Witnesses said ICE provided all White and Black workers Blue Armbands. All the Latino workers were put in line and forced to prove their legal status. ICE, in their uniforms and wearing side arms, caused ALL Latino workers to shiver in fear as they went through this ritual. The exits were sealed. Some Latino workers were sprayed with Mace.

Here's how an ACLU press release (link no longer available) described what happened.


"We are deeply concerned by reports that workers at the factory where the raid occurred were segregated by race or ethnicity and interrogated, the factory was locked down for several hours, workers were denied access to counsel, and ICE failed to inform family members and lawyers following the raid where the workers were being jailed," said Monica Ramirez, a staff attorney with the ACLU Immigrants' Rights Project who has traveled to Mississippi to meet with family members and lawyers about the government's actions.

So you see, brown people know that if Trump's plan to "deport 'em all" was ever implemented, they are all at risk of "papers please" interrogations - regardless of their legal status. It hasn't been that long since that is exactly what happened in this country.
Posted by Nancy LeTourneau