In an effort to understand what is happening in the Republican Party and the way the 2016 presidential nominating process is unfolding, we tend to apply labels. Often that means contrasting "the base" with "the establishment." In thinking about the former, we talk about the tea partiers and/or evangelicals (who often overlap). When it comes to the establishment, we assume that it's all about the big money folks who finance these campaigns.

One way this plays out is in an assumption that Trump is appealing to the base while the establishment supports candidates like Bush. But as people like Ed Kilgore have pointed out, Trump's base is made up primarily of white working class Republicans. Many of them are what we used to call "Reagan Democrats" because prior to the Southern Strategy (ignited by Nixon and Reagan) and culture wars (fueled by folks like Pat Buchanan), they were Democrats.

But in order to understand the appeal of someone like Carly Fiorina lately, we need to talk about people who were Republicans long before any of that happened. Let's call them "Goldwater Republicans." These are the people who didn't need racial dog whistles to develop a distrust of big government. They bought it back in 1961 when Ronald Reagan fought against the idea of Medicare by calling it socialized medicine. They are the foreign policy hawks who thought we lost in Vietnam because political influences made us fight with one hand tied behind our back. They are also the ones who have always taken the side of management over labor (the reason most working class white people were originally Democrats).

We might call these folks "the Republican base" because they've been there all along. But, due to their identification with management over labor, they might also be called "establishment Republicans." Many of them are white collar as opposed to blue collar. And yet, they're not in the same class as the Kochs and Adelsons.

You will find these voters in the ranks of the 70-75% of Republicans who are not joining the Trump bandwagon. It's probably true that some of them have toyed with the idea of supporting Ben Carson (all of these groups have tremendous overlap with self-described evangelicals who tend to love Carson). But at least in the debates, he has sounded rather mushy and weak, so it will be interesting to see how long that lasts.

From what I've seen of these folks, they're floundering about who to support. Bush is looking pretty emasculated and Rubio hardly looks old enough to vote - much less run the most powerful nation on earth (although he looks better with each debate).

That's where Fiorina scored so well in last week's debate. Since these folks already think that what this country needs is someone with real business experience to run the government, the fact that she doesn't have any political experience is seen as an asset rather than a liability. And, from their perspective, all that nonsense about her failure at Hewlett Packard is probably just noise from the liberal media.

I'd say that when it comes to actual voters (rather than simply financiers), the battle for the Republican nomination is coming down to one between white collars and blue collars. For the former, it might turn into a contest between Fiorina and Rubio. Via Sam Wang, here's how that's looking right now. 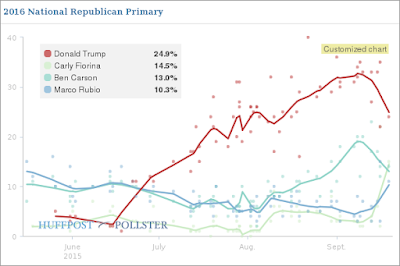