At a time when:

* African Americans have to stand up to say that "Black Lives Matter," while Republican candidates talk about a mythological "crime wave,"

* The Cradle to Prison Pipeline means that 1 in 3 black boys born in 2001 will face imprisonment in their lifetimes,

* The candidate leading the race for the GOP presidential nomination has become the standard-bearer for white supremacists,

* Republicans all over the country are working to restrict access to voting,

* Republicans demand to see our first African American president's birth certificate to prove he is an American citizen, and things like this happen... 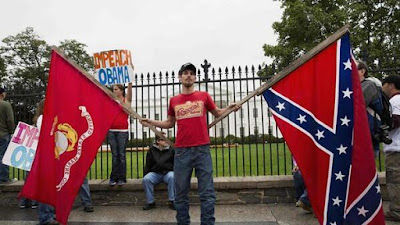 Jeb Bush basically tells a room full of white people in South Carolina that the only reason African Americans vote for Democrats is because they are offered "free stuff."

That, my friends, is the Republican Southern Strategy in a nutshell.
Posted by Nancy LeTourneau