The CNN Republican presidential debate came about one week after the end of "silly season" (during which all the media had to talk about was Trump-mania). After an event like a debate, we are always told to wait a while to see how the results are reflected in the polls. What's interesting though, is that by the time we actually get poll results, everyone has moved on. So lets change that. It's now been two weeks since the debate. What happened? Here's a look at the Huffington Post's poll aggregator (but you'll find pretty much the same thing at Real Clear Politics). 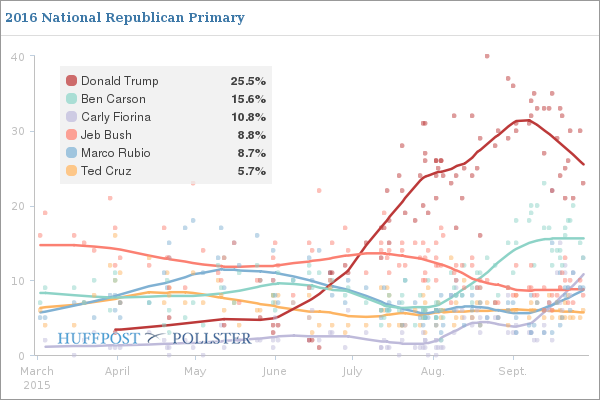 From Labor Day until today, here's how things have changed for the top 6 contenders (the rest of the candidates are under 4% right now):

Overall, Carson, Bush and Cruz have stayed pretty stable. Trump is down. Fiorina and Rubio are up.

That doesn't tell us whether these trajectories will continue. But if we're ever going to be able to identify the winners/losers in a debate, we now have the data to do so. It's obvious that both Fiorina and Rubio did well. On a purely anecdotal note, my hunch is that Trump's drop is at least as related to the fact that the media isn't talking about him incessantly as it is to a poor debate performance.

While Trump has certainly lost ground, his lead was so "YUUUUGE" (as he would say), that even after slumping almost 6 points, he still leads the pack. Unless someone does something really dramatic (certainly not out of the question), this is probably how things will look until the next debate on October 28th.
Posted by Nancy LeTourneau