I remember that, prior to the election of Barack Obama, the conventional wisdom was that Democrats had to find a way to win Southern states in order to elect a president. That was a direct result of the Republican's Southern Strategy and was confirmed by the fact that - after Ronald Reagan's sweeping victory over Walter Mondale in 1984 - the only presidential success Democrats experienced was in electing Southern governors (Carter from Georgia and Clinton from Arkansas). The election of our first African American president from Illinois (and Hawaii) changed the map when it comes to presidential elections.

Now we are hearing from a chorus of pundits/strategists that the only way Democrats can win midterm elections is to abandon "identity politics" and appeal to white working class voters.  Thomas Edsall is one of the people who regularly makes that argument and he's done so again with an article titled: How Did the Democrats Become Favorites of the Rich?

Edsall makes this claim by first of all providing data showing that Democrats are raising money from wealthy donors at the same rate as Republicans and that Democrats now represent congressional districts that "tilt towards the well-to-do." Part of his argument goes as follows:

Then he goes on to point to policies the Democrats helped pass in the 1990's that aligned with the interests of those donors/voters. As such, he concludes that the party has left its "populist roots" and that this is because they have become "the political home for those whose most passionate cause is cultural, as opposed to economic, liberalism..." Here's his conclusion:


The practical reality is that the Democratic Party is now structurally disengaged from class-based populism, especially a form of economically redistributive populism that low-to-moderate-income whites would find inviting.

Edsall's point about President Obama's appeal to upper income voters reminded me of an article by Andrew Gellman and Avi Feller that I just found recently in which they analyzed data from exit polls in the 2012 presidential election. They open with data showing that the wealthy continued their strong support for the Republican candidate Mitt Romney. But...


...there’s much more to this story. The maps we have made show that the election was not just about red and blue states. What’s actually going on is that the division between red and blue America is mostly about a split among richer voters... 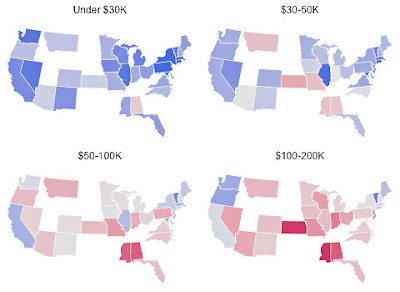 In other words, contrary to what you have heard, there’s only a strong red America-blue America split toward the top of the income distribution. Toward the bottom, the electoral map is a sea of blue.

Gellman and Feller find the same kind of distribution when comparing differences along the lines of age, gender and race. And they conclude with this:


In all these cases, the red-state, blue-state division is sharper in categories that tend to vote Republican. Put another way: Obama’s voting blocs look about the same everywhere in the country, while Romney’s vary more from state to state.

This is not a story about the Obama campaign’s strategy or Mitt Romney’s failures as a presidential candidate — the demographic maps for 2004 and 2008 look very similar. The red-blue electoral map that we’re used to poring over is mainly the result of a political and geographic divide among American voters at the older, richer and whiter end of the socioeconomic spectrum.

Another way of saying the same thing is that - outside of the Republican strongholds of the South and Mountain West, Democrats have been winning over the "older, richer and whiter end of the socioeconomic spectrum" - all while maintaining their base among the younger, less wealthy and people of color. That is what made the election of a Black man from Illinois possible.

In Part II we'll take a look at how that election affected Democratic policy proposals.
Posted by Nancy LeTourneau