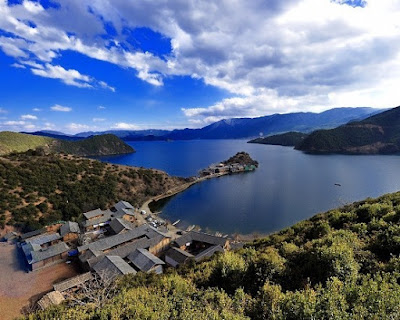 If I was younger and could more easily handle traveling to difficult-to-reach places, this spot on Lugu Lake in the westernmost regions of China would be at the top of my bucket list. That's not just about the gorgeous scenery. Amy Qin tells us some of the history of the uniquely matrilineal culture of the Mosuo people that developed along these shores.


Known in Mandarin as zouhun, or walking marriage, tiesese is an alternative to matrimony in which men visit women at night to fulfill the need for procreation and sexual gratification. Traditionally, a Mosuo woman might have several tiesese relationships during her life, sometimes simultaneously...

With tiesese, sex is kept separate from family, and men and women are generally expected to spend their lives in the houses in which they were born. As a result, sexual partners rarely occupy the same dwelling. Household harmony is valued above all else, including conjugal relationships.

In traditional Mosuo culture, family life is structured around the basic social unit, known as the “grand household,” in which children are raised by their mother and her side of the family. And while children typically know their biological fathers, maternal uncles are responsible for taking on the paternal role, helping to raise and provide for their sisters’ children.

Years ago I read about the Mosuo culture in a book titled: Leaving Mother Lake: A Girlhood at the Edge of the World by Yang Erche Namu and Christine Mathieu. What Qin fails to point out in the article quoted above is that this family arrangement grew out of the reality that Mosuo men had to be away from home on hunting expeditions for extended periods of time. And so centering family life around mothers and their relatives made sense.

But perhaps more significantly, getting away from the whole notion of children being some kind of patrilineal status symbol (the norm that developed in patriarchal cultures) allowed other forms of family and care-giving to develop.

What we know from our own cultural history is that patrilineal norms eventually developed into the establishment of the nuclear family as the basis for childrearing. That was already a leap away from the idea of "it takes a village to raise a child." And now it is more and more common for children to be raised by single mothers. So the unit that cares for children has gotten increasingly smaller.

Especially in the world of conservative politics, you'll find a lot of talk about how - for the sake of the children - we need to go back to the nuclear family as the basic cultural unit. While I'm sure that the structure of 2 parents raising children will survive long into our future, I suspect that cultures evolving backwards is simply not realistic. We might, like the Mosuo did a long time ago, figure out something that works even better. As long as it keeps the needs of children front and center, I suspect that could be a good thing.

So...the next time you hear a politician bemoaning the breakdown of the family, ask her/him if they've ever heard about the Mosuo culture.
Posted by Nancy LeTourneau