Why Jeb Bush is in Trouble (updated)

The latest news from team Jeb! is not looking good.

So what's the deal here? Isn't Jeb the "shock and awe" candidate when it comes to campaign cash? Didn't his superpac pull in the largest stash ($100 million) ever recorded in campaign history? Aren't we living in an oligarchy where the guy with the most cash from the 1% automatically wins?

It's true, Jeb Bush's superpac is the largest war chest ever captured in U.S. presidential history. But as we've discussed before, that money can't be used to pay for the nuts and bolts of his campaign. Hence, if you work for Bush, you're likely getting a pay cut right about now.

When it comes to cash for the actual campaign operation, so far Bush is hauling it in at about the same rate as Rubio and Cruz (all in the $24-$26 million range so far). But I suspect that someone in Jeb's finance team noticed the same thing I did about the huge difference between these campaigns. Of the money raised so far, only 5% of Bush's has come from small donations (under $250). For Rubio that number is 27% and for Cruz it's a whopping 42%.

If my assumption is correct that the majority of the large contributions came in the form of the maximum allowed - $2,700 - Jeb could be in big trouble because his donors have already given as much as they can until after the convention. Hence, all the cutbacks right now. On the other hand, Rubio and Cruz have a larger cadre of supporters/donors who can continue to give money to their campaigns.

That is precisely why one Bush supporter nailed it with this statement:


“We’ve reached one million people [via voter contacts] and we’re in fifth place nationally?” said one Bush supporter who didn’t want to be identified. “I trust the campaign. I just don’t know about the voters. It’s like the more Jeb is out there, the less well he does.”

If, for one, take heart in the fact that no matter how much money a candidate's superpac is sitting on, it's still the voters who get to decide in the end.

UPDATE: Confirming my assumption that Bush raised most of his contributions from people who gave the maximum amount ($2,700), Paul Blumenthal at HuffPost provides this chart (based on July - September contributions). 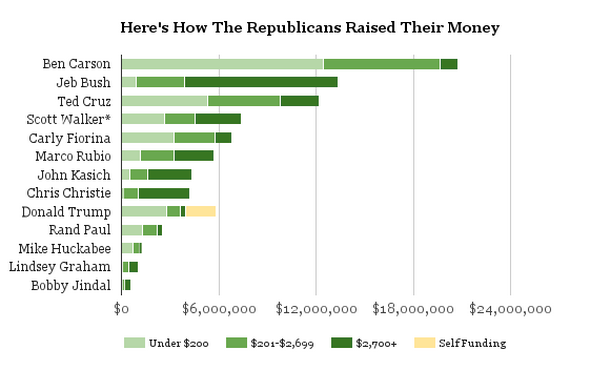 This chart also suggests that Christie (and perhaps Kasich) might run into the same problem.
Posted by Nancy LeTourneau