Two Races in the Republican Primary 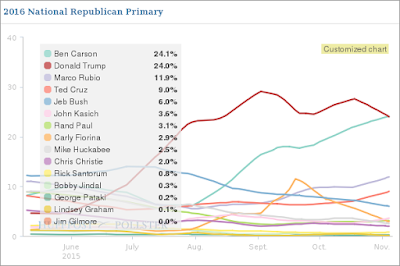 When I look at the Republican primary poll aggregators, it's hard to avoid the conclusion that the state of the race right now is that there are two contests beginning to shape up.

The first is the one between the current front-runners - Trump and Carson. Since both of them are blowing up all of our previous assumptions about presidential campaigns, it is impossible to know how all that will turn out.

But another battle is beginning to shape up between Rubio and Cruz. A sure sign of that came when Cruz, who regularly excoriates Republican Congressional leadership but has kept his powder dry in going after his competitors for the nomination, went after Rubio recently.


“As I look at the race, historically, there have been two major lanes in the Republican primary. There's been a moderate lane and a conservative lane,” Cruz told CNN on Thursday. “Marco is certainly formidable in that lane. I think the Jeb [Bush] campaign seems to view Marco as his biggest threat in the moderate lane.”...

“Every day, more and more conservatives are uniting behind our campaign,” Cruz said. “And once it gets down to a head-to-head contest between a conservative and a moderate, I think the conservative wins.”

We all know that in the Republican Party these days, calling someone a "moderate" is not much different than calling them an "Obama-lover." It is the kiss of death. But the idea that Rubio is a moderate to Cruz's conservatism is a joke.

On the other hand, it's probably not an accident that this report questioning the story Rafael Cruz (Ted's father) tells about fighting Castro suddenly appeared in the press yesterday. Things are definitely heating up.

I have already outlined why I think it is important to keep an eye on Cruz - if not for his ability to actually win the nomination, then the possibility of him creating havoc at the Republican Convention next summer with a stash of delegates. Jamelle Bouie takes it even farther in laying out the possibilities. The one thing he adds is an interesting parallel to the 2008 Democratic primary - with Rubio being Clinton and Cruz being Obama.


Obama’s Super Tuesday success was a function of organizing. While Team Clinton focused on polls and television ads, the Obama campaign made heavy investment in grassroots and local organizing in small (but critical) states. Months of finding supporters, recruiting volunteers, and building infrastructure paid off on election night, where Obama could maximize his gains in favorable (or otherwise neglected) territory and minimize his losses in the large states that backed Clinton.

What a candidate needs to pull that kind of thing off is cash. Cruz has more on hand right now than any other candidate. And what has he done with his money so far?


The Cruz campaign has invested much of its resources into “high-tech fundraising efforts” and building local organizations in states like Alabama, Georgia, Nevada, Oklahoma, South Carolina, and Tennessee.

In his battle with Cruz, Rubio is probably going to be able to call on all the forces of the Republican establishment - who detest Cruz. That sets up the possibility for another epic clash between the establishment and the insurgents.
at November 10, 2015