What's Up With Millennials?

The millennial generation is a nightmare for Republicans. They are more diverse, more urban, more college-educated, more tolerant and more liberal than their predecessors. The result is that in 2008 and 2012, they voted overwhelmingly for Barack Obama. In 2016, this generational cohort is predicted to make up 38% of the electorate. So it should come as no surprise that the topic of millennials has been addressed recently by two conservative writers: Carl Wagner at Real Clear Politics and Donald Devine at The American Conservative.

Before taking a look at what these two writers have to say about millennials, it is important to keep in mind that conservatives often cling to the idea that we all get more conservative with age. As the old saying goes:

But the trouble with that assumption is that research has proven that it is a myth. Here's what Wagner has to say about that:


Over the past 100 years generations have tended to vote, for most of their lives, for the party on which they cut their political teeth. The “Greatest Generation” came of age during the FDR presidency and voted the Democratic nominee in every election (except the Eisenhower/Stevenson campaigns) for the next three decades. Same with the boomers, who came of voting age en masse in 1972. Nixon won them overwhelmingly and they voted for every Republican presidential candidate until 1992.

Wagner's whole premise is that the GOP is in big trouble if they don't do something different.


If Republicans don’t change their tune and their tactics, the “wall” Donald Trump says he wants to build won’t be on the U.S.-Mexican border, it will be between the Republican Party and victory in 2016 - and for decades to come.

Devine takes a different approach. He tries to argue that millennials aren't as liberal as they've been made out to be. He makes the case that they don't favor bigger government if it means paying higher taxes. But here are the two arguments that I found fascinating. First of all:


Millennials reported closer relationships with their families and were much more supportive of a responsibility to care for elderly parents than earlier generations. These do not seem to be wildly leftist views.


Pew found fewer millennials considered themselves religious, patriotic, or environmentalist than any earlier generation. Still, 86 percent said that they believed in God, although with less certainty than older Americans, and only 11 percent said they did not believe at all.

What Devine has done is fall for another myth - that liberals don't believe in God and family simply because those are the spheres where the whole idea of "freedom" comes into play for them (as opposed to conservatives, who actually want to expand the government's reach into decisions about religion and family).

On a purely anecdotal level, what I noticed about millennials from spending a lot of time working with them in my previous profession is that they don't trust big institutions. That doesn't bode well for liberals, but is understandable in light of the government's failures going all the way back to Vietnam and Nixon up until the Iraq War and the Great Recession. They've also witnessed the corruption in large religious and nonprofit institutions.

But what I also noticed is that millennials have a great deal of trust in themselves...and this very old (by millennial's standards) quote from Margaret Mead: 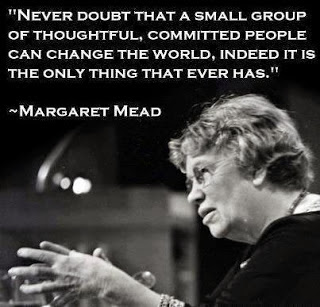