Ian Reifowitz has written a fascinating post that takes aim at a lot of conventional wisdom. He starts out by relaying a conversation he had with his mother just after the shooting in San Bernardino where she said, "What's this world coming to?" Isn't that a thought or comment we've all heard lately?

Then Reifowitz provides us with some facts...starting with this graph: 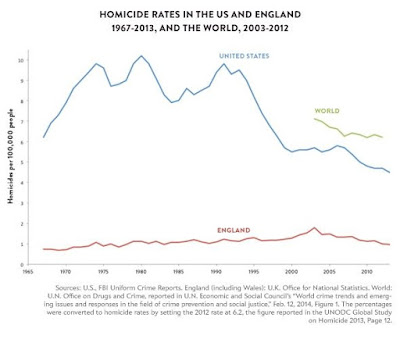 In other words, the homicide rate/100,000 people in this country is lower than its been in 50 years. He goes on from there to give us a few more facts:

* Violence in schools has dropped dramatically in the past two decades,

* The overall rates of physical and sexual abuse of children has also gone down,

* The rates of rape/sexual assault and violence against intimate partners now stand at one-fourth the peak levels reached only a couple of decades ago.

But what is even more interesting is that Reifowitz seems to almost feel the need to apologize for sharing these facts.


The last thing I want to do is put people down for being afraid, or, even worse, to belittle the pain and hurt people are feeling...

Separate from the question of whether fear about gun crime and mass shootings is productive or destructive is the fact that knowing the truth is always better than being misinformed. That should go double for us progressives, given that we are supposed to be a “reality-based community.”

In an environment where everything is about ramping up the fear and outrage, Reifowitz feels the need to be apologetic for sharing good news - or as Keith Humphries put it - "airing clean laundry."

And we wonder why people are so angry, frightened and cynical.

None of this is to suggest that these problems are solved. We still have a lot of work to do. But we also have access to a trove of data to be mined on these issues about what is actually working. And we have quantifiable improvements that should give us hope that we can do better. But that only happens when we chose facts over fear.
Posted by Nancy LeTourneau