If reality mattered, the information in a new report on undocumented immigration to the United States by the Journal on Migration and Human Security would upend the nasty nativism that has consumed the Republican presidential candidates. Here is how Jerry Markon reports the findings in the Washington Post.

Although the new report does not cite specific reasons for the decline, other experts have attributed it to a combination of tighter U.S. border security measures and economic and demographic changes in Mexico, such as women having fewer children.

A key — but largely overlooked — sign of these ebbing flows is the changing makeup of the undocumented population. Until recent years, illegal immigrants tended to be young men streaming across the Southern border in pursuit of work. But demographic data show that the typical illegal immigrant now is much more likely someone who is 35 or older and has lived in the United States for a decade or more.

Do you recognize all of the ways this discredits almost everything the Republicans have been saying lately?

* We are not experiencing hordes of immigrants crossing our border lately.

* We don't need to waste money on a wall.

* The REAL issue for immigration reform is not so much about border security as it is about what to do with the undocumented immigrants who are already in this country - many with long-standing ties in their community.

In light of these facts, one might wonder why so many Americans are freaking out about immigrants. The executive summary of this report gives us a clue about that:

Here is something Pew Research recently reported about the legally resident foreign-born population:


By 2013, most immigrants were from either Latin America or South or East Asia, a very different profile than that of immigrants in 1960 and 1970, who were mostly from Europe. 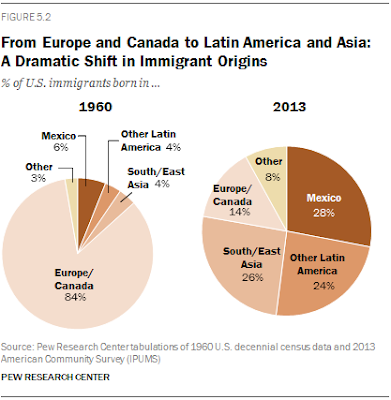 In other words, what Republicans are reacting to is not so much illegal immigration as it is about a shift in the race/culture of immigrants who are coming to this country...something that results in the "browning of America."
Posted by Nancy LeTourneau