The Not-So-White Side of Iowa

Much of the analysis of the Iowa caucuses (especially on the Democratic side), has focused on how white the electorate is. That is because it is true. But I wonder if any of you remember the horror of seeing the Bush administration's ICE agents raid a meat-packing plant in 2008 and round up (mostly) Hispanic immigrants. Do you remember where that happened? It was in Postville, Iowa.

Back in 2011, the New York Times ran an interesting story by A. G. Sulzberger about the changing face of the rural plains.


For generations, the story of the small rural town of the Great Plains, including the dusty tabletop landscape of western Kansas, has been one of exodus — of businesses closing, classrooms shrinking and, year after year, communities withering as fewer people arrive than leave and as fewer are born than are buried. That flight continues, but another demographic trend has breathed new life into the region.

Hispanics are arriving in numbers large enough to offset or even exceed the decline in the white population in many places. In the process, these new residents are reopening shuttered storefronts with Mexican groceries, filling the schools with children whose first language is Spanish and, for now at least, extending the lives of communities that seemed to be staggering toward the grave.

Here is how they demonstrated that change in graph form: 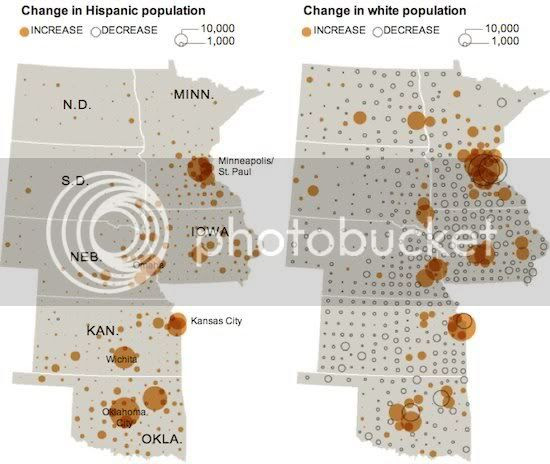 While it is true that some of the Hispanic population in these rural areas are migrants and most likely undocumented, that is not necessarily true in all cases. For example, those working in meat-packing plants near farms are probably permanent residents - although not all are here legally.

As the NYT article pointed out, this has created tensions in many of these small towns with the older, more conservative white residents. In this way, these rural areas are experiencing the very same demographic changes and challenges we usually assume are happening in more urban areas.

That is why this article by Dave Price about Marshalltown, Iowa being visited by Trump, Clinton and Rubio all in one day caught my attention. It is one of those places that is experiencing this kind of transition.


As many smaller Iowa towns are shrinking, Marshalltown is experiencing the opposite: The population has increased over the past 15 years, and it’s almost entirely due to an influx of immigrants. The number of non-Hispanic people in town has actually declined slightly since 2000, while Hispanics have more than doubled their share of the population in that time. They now make up more than a quarter of the city’s 28,000 residents.

Reading the story will give you examples of some people who embrace the changes and some who deeply resent them. It captures exactly what is happening across the country. This is not so much a story about voter demographics as it is one of communities struggling with transition. And that struggle is certainly playing out in the issues that are front and center in this election.
Posted by Nancy LeTourneau