Assessing the Threats We Face 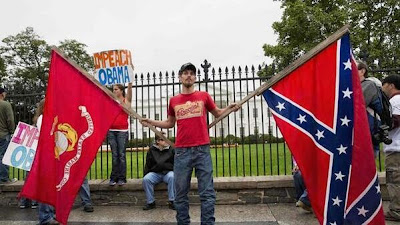 Obviously, Hillary Clinton's firewall held - at least in South Carolina - where she beat Bernie Sanders by almost 50 points on Saturday. In doing so, she won 86% of the vote from African Americans. But perhaps even more importantly:


Black voters in South Carolina cast 6 in every 10 Democratic primary votes, according to CNN's exit poll data. That ratio is huge — and sets a record-high in South Carolina black voter participation rate. The previous high was 55 percent, set in 2008, when the first black president was on his way to being elected.

For a while now, the question has been whether or not people of color - particularly African Americas - would turn out for the Democratic candidate in the numbers we saw when Barack Obama was on the ballot. At least in the South Carolina primary, they actually exceeded that benchmark.

That was surprising to some people. But perhaps a quick walk down memory lane explains what happened.

First of all, I've already noted how the nomination and election of Barack Obama was greeted with both hope and terror in the hearts of many African Americans. The hope was the culmination of something most thought they wouldn't see in their lifetimes. Beyond that, the way this President and his family have handled themselves in office has been a great source of pride, while his accomplishments will give him a place of honor in our history. Therefore, in many Black homes he has been adopted as part of the family.

But the terror indicated that those who felt it were very aware of the fact that we had not reached a post-racial America. Almost immediately during the 2008 election Obama was accused by those on the right of "paling around with terrorists," saw vicious attacks on his pastor and had his citizenship in this country questioned. Once he was elected, we witnessed unprecedented obstruction and disrespect of - not just his policies - but his very personhood. This country's first African American president consistently faced an opposition that challenged his legitimacy in office.

Meanwhile, the courts and Republican legislators all over the country have been attempting to roll back the voting rights that so many African Americans fought and died for, and they are watching their sons and daughters be killed at the hands of police officers and vigilantes.

We are now witnessing a Republican presidential primary where the candidates are racing to outdo each other in their contempt for people of color. The field is being led by someone who has been embraced by white supremacists and just yesterday refused to disavow the support he is receiving from KKK groups - claiming he needs to do research to understand who they are.

With all of that, is it any surprise that African Americans would assume that this country is facing the threat of a confederate insurgency?

Into that mix comes the Democratic candidate Bernie Sanders, whose campaign is based on the idea that we are living in an oligarchy where both Parties have been captured by the forces of Wall Street. That defines the threat very differently than what many African Americans see and feel right now.

In addition, Sanders has a history of calling President Obama naive and suggesting that he should be primaried in 2012. One of his most prominent surrogates in the African American community once said that the President had a "fear of free black men" and just recently suggested that civil rights heroes like Rep. John Lewis and Jim Clyburn have been bought off by Wall Street.

Compare that to Hillary Clinton, who has embraced President Obama and promised to build on his legacy. Not only that...she recognizes the challenges we face in breaking down the barriers that divide us and keep people marginalized.

Clinton and Sanders have assessed the threats we face very differently. Voters are faced with a choice of which candidate has most accurately defined those threats and offered a way forward. It should come as no surprise to anyone why African Americans are vigorously aligned with Clinton's vision.
at February 29, 2016