Some Much-Needed Context About the 1994 Crime Bill 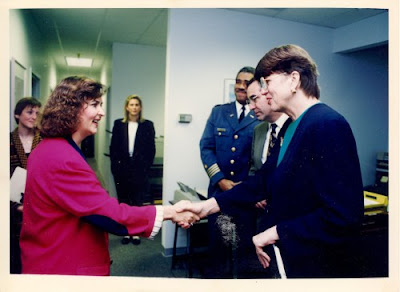 Yes, that is a picture of me welcoming then-Attorney General Janet Reno - along with Congressman Bruce Vento and Police Chief William Finney - to a visit at the nonprofit where I worked. Just a couple of years prior to this event, I had gotten a job as the executive director of the agency whose mission was focused on juvenile crime prevention. That put me on the front lines of what was going on at the community level with an issue that was demanding a lot of attention in the early 1990's.

I'm sure that every urban center has its own stories that capture the zeitgeist of those years. The one I remember is about a Cambodian gang that entered a convenience store and brutally murdered everyone on the premises. One veteran police officer told me that in all his years as a cop he'd never seen anything as gruesome as that crime scene.

It was in that context that AG Reno visited us as part of her travels around the country to highlight local community-policing projects. Our Police Chief was at the forefront of those efforts and the agency I worked for had just entered into a unique collaboration with the department to partner with police officers on their domestic calls for service (the largest category of police response) to provide mental health and social services. Our contention was that this partnership modeled what community-policing could mean in those situations.

The visit came just before passage of the 1994 Crime Bill that is under so much scrutiny right now. While my experience was local and pretty personal, Mark Klaiman has provided the bigger picture in an article titled: The Current Crime Debate Isn't Doing Hillary Justice. Here's his summary of what was going on at the time:


1994 was the fifth consecutive year in which the FBI counted more than 23,000 murders: an all-time high. Then, as now, about half of the victims were African-American. As it turned out, that was the peak. Today’s murder rate (and total violent-crime rate) is just about half of its 1994 level...

No one knew then that we’d seen the worst. All we knew is that the number of murders had more than doubled, that the total number of violent crimes had increased six-fold in the previous thirty years, that no reversal of trend seemed to be in sight, and that the street-level arms race financed by the crack trade had expanded the age range of killers and their victims down into adolescence. If you weren’t seriously worried about crime in 1994, you just weren’t paying attention.

As Klaiman says, "From our perspective now, making crime a primary political issue looks a little bit nuts." But I can tell you from personal experience that there was not a politician around back then who wasn't making this issue a priority - Republican or Democrat. Some of the loudest voices demanding action were those of African American leaders. The question was, "what do we do about it?"

In his article, Klaiman does an excellent job of covering the good, the bad and the ugly of the actual federal legislation that grew out of that scenario - including the fact that the Violence Against Women's Act and the assault weapons ban were part of the package. He notes that the 100,000 new police officers came with a catch (something the Bush administration later ignored):


The thing the President and his advisers really seemed to believe in was carrying out his campaign pledge to put “100,000 new cops on the beat” by providing federal money to hire local police officers. But given the apparent uselessness of just adding more resources to a system that didn’t know what it was doing, the Administration added a twist: to get the money, departments had to commit - at least on paper - to implement “community policing” to move departments away from the demonstrated futility of the random-preventive-patrol-plus-rapid-response-to-calls-for-service model that had dominated the “reform” style of policing since the 1920s.

From my own experience, that is the provision that had the most impact on our city - and was the reason for AG Reno's visit.

There is more I could say about this excellent article. But in order to be informed, you really should go read the whole thing. When it comes to the "bad" or "ugly" portions of the bill, I will simply note that former President Bill Clinton has openly addressed the mistakes he made. We have not, as yet, heard anything from Bernie Sanders about his decision to vote for the bill.
Posted by Nancy LeTourneau