"Capitalism Has To Be Attended To" 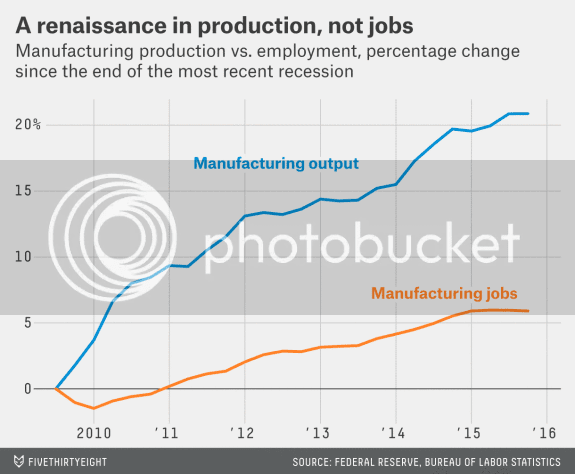 With all the focus on trade agreements from both the Sanders and Trump campaigns, there are a lot of issues that are being overlooked. The graph above is from an article by Ben Casselman titled: Manufacturing Jobs Are Never Coming Back. It shows that, while manufacturing output in this country has increased over the last 7 years, jobs have been slow to return. The reason: automation.


Here’s the problem: Whether or not those manufacturing jobs could have been saved, they aren’t coming back, at least not most of them. How do we know? Because in recent years, factories have been coming back, but the jobs haven’t. Because of rising wages in China, the need for shorter supply chains and other factors, a small but growing group of companies are shifting production back to the U.S. But the factories they build here are heavily automated, employing a small fraction of the workers they would have a generation ago.

The story Abha Bhattarai tells about Thomaston, GA is an example of what he is talking about.


Not so long ago, this rural town an hour outside Atlanta was a hotbed of textile manufacturing.

In the late 1990s, there were six major mills here. Their machines spun children’s clothing for Carter’s, made tire cords for B.F. Goodrich and produced bed sheets for J.C. Penney, Sears and Walmart.

What has happened here in the 15 years since then tracks the slow comeback of manufacturing in the United States. Two textile companies have come in, investing millions in new technology and adding about 280 jobs in this town where one-third of the residents still live below the poverty line. It is becoming more affordable to produce textiles in the United States as machines become more efficient, companies say. Major firms are more willing to pay higher prices for domestically sourced products, and rising wages in China mean there is less of an advantage to making products overseas.

I am reminded of what David Simon said years ago about what he was witnessing that became in inspiration for his HBO series The Wire.


We are in the postindustrial age. We do not need as many of us as we once did. We don’t need us to generate capital, to secure wealth. We are in a transitive period where human beings have lost some of their value. Now, whether or not we can figure out a way to validate the humanity of the individual, I have great doubts...

As for the characters on the program, their lives are less and less necessary. They are more and more expendable. The institutions in which they serve are indifferent to their existence...

I didn’t start out as a cynic, but at every given moment where this country has had a choice - its governments, institutions, corporations, its social framework - to exalt the value of individuals over the value of the shared price, we have chosen raw unencumbered capitalism. Capitalism has become our god. You are not looking at a marxist up here, but you are looking at somebody who doesn’t believe that capitalism can work absent a social framework that accepts that it is relatively easy to marginalize more and more people in this economy. Capitalism has to be attended to. And that has to be a conscious calculation on the part of society, if that is going to succeed. Everywhere we have created an alternate America of haves and have-nots. At some point, either more of us are going to find our conscience or we’re not.

All of that was happening years before the Great Recession and isn't necessarily a result of trade agreements. It points to the need to attend to capitalism in a way that puts the value of human beings into the equation of our social framework. In other words, it requires that we expand our moral imagination.
Posted by Nancy LeTourneau