It really doesn't matter what Democrats think of Mitt Romney's speech today. He wasn't talking to them. Romney's point was to try to persuade Republicans to vote for someone (as it turns out, any Republican) other than Donald Trump.

The truth is that not many Republicans will actually hear the speech. Instead, they'll hear what Brett Baier, Bill O'Reilly, Sean Hannity and their guests have to say about it tonight. So that will be interesting to watch.

The challenge for establishment Republicans is that they really don't have a leader/spokesperson who can speak with credibility to the Trump phenomenon. Romney is probably the best they can come up with right now. But he is terribly flawed in this endeavor. The biggest reason for that is that he is the epitome of everything base voters are mad about when it comes to the Republican establishment: wealthy, moderate, loser.

Given that the one skill Trump has in spades is the ability to find and exploit his opponents weak points, that is already showing up in his twitter response to the speech.

Looks like two-time failed candidate Mitt Romney is going to be telling Republicans how to get elected. Not a good messenger!
— Donald J. Trump (@realDonaldTrump) March 3, 2016

Of course, then there's this:

Why did Mitt Romney BEG me for my endorsement four years ago?
— Donald J. Trump (@realDonaldTrump) March 3, 2016

This image of that endorsement four years ago will be ubiquitous on social media by the end of the day. 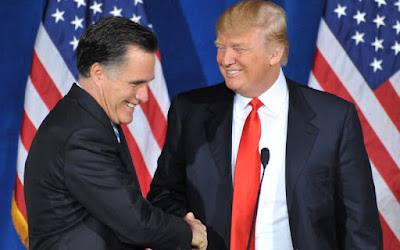 Nevertheless, Romney said a couple of things that are worth noting. This is one of the things I've heard some of my Republican friends say:


Think of Donald Trump's personal qualities, the bullying, the greed, the showing off, the misogyny, the absurd third grade theatrics. We have long referred to him as "The Donald." He is the only person in America to whom we have added an article before his name. It wasn't because he had attributes we admired.

Now imagine your children and your grandchildren acting the way he does. Will you welcome that?

As angry as some Republicans might be at government and their own Party's leadership, they care about their kids and who they look up to. Donald Trump is not the kind of person they want their children to emulate.

Romney summed up his speech with this:


Here's what I know. Donald Trump is a phony, a fraud. His promises are as worthless as a degree from Trump University. He's playing the American public for suckers: He gets a free ride to the White House and all we get is a lousy hat.

His domestic policies would lead to recession. His foreign policies would make America and the world less safe. He has neither the temperament nor the judgment to be president.

This is also something I've heard from my Republican friends. While they might appreciate that Trump is giving voice to their anger, there is a part of them that remembers what it is we actually elect a president to do. That is when they recognize that Trump's temperament and judgment could pose a big problem.

I can imagine Mitt Romney telling himself that before this primary was over, he needed to speak up. He's done that now. But given that he is such a flawed vehicle, I doubt his words will have much impact.

However...to the extent that those two parts of his message that I highlighted seep into the conversation that right wing media is having about this primary, it has the potential to give some Trump supporters a moment's pause.
Posted by Nancy LeTourneau