Over the course of Obama's presidency, no one has done a better job of digging deep into his thoughts and strategy on foreign policy than Jeffrey Goldberg.

There was the interview in March of 2012 that focused on the President's relationship with Iran and Israel and laid out his thinking on a strategy to negotiate with the former on ending their nuclear weapons program. One of the things I noticed from that interview is that this President prefers a strategy to co-opt his adversaries rather than an attempt to dominate and/or defeat them. That is where many of us see the influence of his Asian background.

In May 2015, Goldberg published a report on his interview with President Obama following the announcement of the Iran agreement. But perhaps the most powerful segment came in the President's heartfelt empathy with the Jewish people. 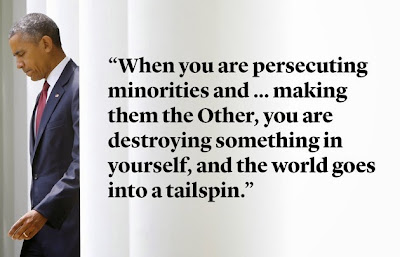 Now today, the Atlantic cover story is an article about President Obama's foreign policy based on several interviews Goldberg held with both he and some of his staff. There is much to comment on. But I'll limit myself to one thing that stood out to me - his dislike of "free riders."


If Obama ever questioned whether America really is the world’s one indispensable nation, he no longer does so. But he is the rare president who seems at times to resent indispensability, rather than embrace it. “Free riders aggravate me,” he told me...

Part of his mission as president, Obama explained, is to spur other countries to take action for themselves, rather than wait for the U.S. to lead. The defense of the liberal international order against jihadist terror, Russian adventurism, and Chinese bullying depends in part, he believes, on the willingness of other nations to share the burden with the U.S. This is why the controversy surrounding the assertion—made by an anonymous administration official to The New Yorker during the Libya crisis of 2011—that his policy consisted of “leading from behind” perturbed him. “We don’t have to always be the ones who are up front,” he told me. “Sometimes we’re going to get what we want precisely because we are sharing in the agenda...

The president also seems to believe that sharing leadership with other countries is a way to check America’s more unruly impulses. “One of the reasons I am so focused on taking action multilaterally where our direct interests are not at stake is that multilateralism regulates hubris,” he explained. He consistently invokes what he understands to be America’s past failures overseas as a means of checking American self-righteousness. “We have history,” he said. “We have history in Iran, we have history in Indonesia and Central America. So we have to be mindful of our history when we start talking about intervening, and understand the source of other people’s suspicions.”

This is one of the things that makes this President unique. Most people who have the drive to seek that office are profoundly ego-driven. As such, they want to be in charge and up front. Obama is certainly not devoid of ego or ambition. But he is not driven by those things as much as he is by his intense commitment to thoughtful pragmatism. And he has no time for the victim/rescuer/persecutor world view captured by Karpman's Drama Triangle.

I first realized this about Barack Obama when I read a fascinating article that Ryan Lizza wrote back in 2007 about his days as a community organizer in Chicago. Lizza recalls a story Mike Kruglik (Obama's boss) told about one of their first meetings over a cup of coffee.


On this particular evening, Kruglik was debriefing Obama about his work when a panhandler approached. Instead of ignoring the man, Obama confronted him. "Now, young man, is that really what you want be about?" Obama demanded. "I mean, come on, don't you want to be better than that? Let's get yourself together."

Kruglik remembers this episode as an example of why, in ten years of training organizers, Obama was the best student he ever had. He was a natural, the undisputed master of agitation, who could engage a room full of recruiting targets in a rapid-fire Socratic dialogue, nudging them to admit that they were not living up to their own standards. As with the panhandler, he could be aggressive and confrontational. With probing, sometimes personal questions, he would pinpoint the source of pain in their lives, tearing down their egos just enough before dangling a carrot of hope that they could make things better.

What I noticed is that Obama didn't just ignore the panhandler, he also didn't simply give him a handout. Instead, he admonished him to do/be better. THAT's what made him a great community organizer.

Many of the stories Goldberg tells in this article are about President Obama providing leadership that asks the rest of the world to assume responsibility...to agitate for them to "do/be better." That was his message back in 2009 during his speech in Cairo. It was a call for partnership rather than dominance.