The Connection Between Nativism and Populism

Much has been made about Donald Trump's populist appeal. The argument focuses on his ability to engage voters who are angry at the establishment and his promises that - as a billionaire - he won't be bought and paid for by the big money interests. Instead, he'll fight for "ordinary Americans."

Rick Perlstein notices that some liberal commentators are dismissing Trump's nativist appeal and suggesting that it is this populism that is fueling his success.


Why has Donald Trump been so successful? Matt Taibbi, in Rolling Stone, thinks he has the answer.

He writes, “Reporters have focused quite a lot on the crazy/race-baiting/nativist themes in Trump’s campaign.” Taibbi, though, will not be bamboozled: “These comprise a very small part of his usual presentation. His speeches increasingly are strikingly populist in their content.” Trump’s pitch, which Taibbi seems at least partially to accept: “He’s rich, he won’t owe anyone anything upon elec­tion, and therefore he won’t do what both Democratic and Republican politicians unfailingly do upon taking office, i.e. approve rotten/regressive policies that screw ordinary people.”

But Perlstein has a warning based on history.


I attended the same Trump rally in Plymouth, N.H., as Taibbi. Matt should clean the wax from his ears: I heard the crazy and the race-baiting and the nativist themes raining down like dirty dollar bills at a strip joint.

But leave aside that Mexicans and Syrians are also “ordinary people” who struggle in the modern economy. And that you can’t trust anything Donald Trump says.

No, the core inanity here cuts much deeper. It’s an ignorance of a simple historical fact: Every fascist achieves and cements his power by pledging to rescue ordinary people from the depredations of economic elites. That’s how fascism works.

Perlstein goes on to give examples of the populism that fueled the rise of Hitler in Germany as well as George Wallace in the Southern United States. The tie that binds them is an attachment to a world view based on dominance. The populist fascist gains power by promising the nativists that he will cast out "the establishment" in order to enable their dominance.


Under fascism, economic protection for the goose accompanies dispossession of the gander. White people prosper in part because minorities suffer—whether, under Hitler, by taking away property from Jews, or as Herr Trump expects, by taking back “our” jobs from “them,” whether the them is immigrants or our supposedly duplicitous trading partners.

That is why, as I watch the anger (based on fear) being stoked by this presidential election, I keep going back to this warning from Molly Ivins. 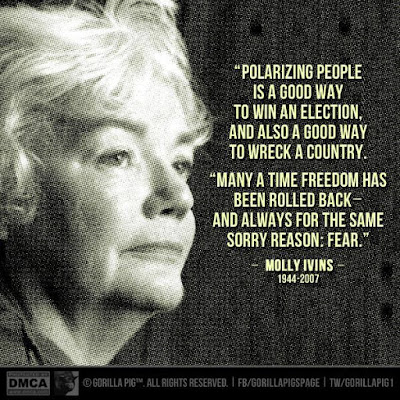