The Day of Remembrance for Truth and Justice 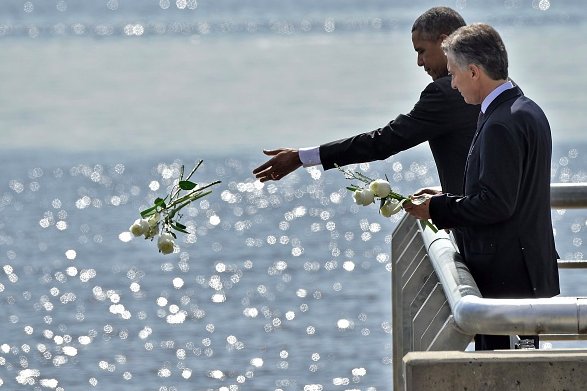 Because of our media's fixation on superficial optics, what most Americans will hear about President Obama's time in Argentina is that he and the First Lady danced the tango at a state dinner. But for the people of Argentina, the optic in the photo above is likely to be the focus of their attention. That is because today is the 40th anniversary of the 1976 coup in that country that led to the brutal massacre of approximately 20,000 people. In Argentina, this is the "Day of Remembrance for Truth and Justice."

To understand the significance of the photo above, you have to know that the ruling junta that came into power in 1976 organized death camps with methods that were reminiscent of the Nazi's. One of the most common of these came to be known as "death flights" where prisoners were injected with sedatives before being dropped from airplanes, still alive, into the Rio de la Plata.

Today, President Obama and Argentine President Mauricio Macri paid tribute to those who were "disappeared" by visiting the Monument to the Victims of State Terrorism at Remembrance Park and throwing flowers into the river that became the watery grave for so many. The President also said a few words.


“There’s been controversy about the policies of the United States early in those dark days,” Mr. Obama said at the Parque de la Memoria...The United States “has to examine its own policies as well, and its own past,” Mr. Obama added. “We’ve been slow to speak out for human rights, and that was the case here.”...

As Graciela Mochkofsky writes, President Obama is offering more than symbolism and a few words to the people of Argentina. She notes that it was under President Bill Clinton that the United States declassified a wide range of documents that revealed "shocking levels of complicity between the American government and the military regimes in Chile, El Salvador, and Guatemala." Argentina received only a small batch of records before the process was halted following the attacks on 9/11 and then a political meltdown in their country.


President Obama is moving to declassify American military, intelligence and law enforcement records that could reveal what the United States government knew about Argentina’s brutal “dirty war” of the 1970s and ’80s, a senior adviser said on Thursday, hoping to pierce the shroud of secrecy that has surrounded a painful chapter in that country’s history.

Susan E. Rice, Mr. Obama’s national security adviser, said that the president would use a visit to Argentina on Wednesday and Thursday, which coincides with the 40th anniversary of the 1976 coup that began the war, to honor the victims and formally begin the declassification process.

“On this anniversary and beyond, we’re determined to do our part as Argentina continues to heal and move forward as one nation,” Ms. Rice said during a speech at the Atlantic Council in Washington.

This is exactly the kind of change I believe in! It is clear that most Americans (including too many on the left) have moved on from those dark days of our past and - with the complicit mainstream media - assume that the only foreign policy that matters is what happens in the Middle East. I am reminded of what President Obama said to Jeffrey Goldberg about that:


In Asia, as well as in Latin America and Africa, Obama says, he sees young people yearning for self-improvement, modernity, education, and material wealth.

...“If we’re not talking to them,” he said, referring to young Asians and Africans and Latin Americans, “because the only thing we’re doing is figuring out how to destroy or cordon off or control the malicious, nihilistic, violent parts of humanity, then we’re missing the boat.”

While so many in the media were shifting between a focus on Brussels, Donald Trump and a tango, President Obama was making sure that we don't miss that boat.
Posted by Nancy LeTourneau