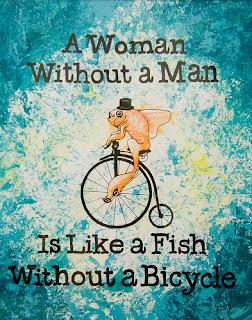 Years ago I jokingly referred to the Gloria Steinem quote in that image at a family gathering. My mother responded with a rage that was not typical for her. I realized quickly that I had struck a nerve about how she had crafted her own identity and the things she valued. I was joking about the bargain with life that she had made back in the early 1950's.

Years later, that bargain is undergoing radical change. Rebecca Traister has written a book titled: All the Single Ladies: Unmarried Women and the Rise of an Independent Nation. In an article adapted from the book, Traister begins by giving us the data related to the change:


In 2009, the proportion of American women who were married dropped below 50 percent. In other words, for the first time in American history, single women (including those who were never married, widowed, divorced, or separated) outnumbered married women. Perhaps even more strikingly, the number of adults younger than 34 who had never married was up to 46 percent, rising 12 percentage points in less than a decade. For women under 30, the likelihood of being married has become astonishingly small: Today, only around 20 percent of Americans ages 18-29 are wed, compared to nearly 60 percent in 1960.

Traister then outlines the impact of that change.


It is a radical upheaval, a national reckoning with massive social and political implications. Across classes, and races, we are seeing a wholesale revision of what female life might entail. We are living through the invention of independent female adulthood as a norm, not an aberration, and the creation of an entirely new population: adult women who are no longer economically, socially, sexually, or reproductively dependent on or defined by the men they marry.

This reorganization of our citizenry, unlike the social movements that preceded it and made it possible — from abolition and suffrage and labor fights of the 19th and early-20th centuries to the civil-rights, women’s, and gay-rights movements of the mid-20th century — is not a self-consciously politicized event. Today’s women are, for the most part, not abstaining from or delaying marriage to prove a point about equality. They are doing it because they have internalized assumptions that just a half-century ago would have seemed radical: that it’s okay for them not to be married; that they are whole people able to live full professional, economic, social, sexual, and parental lives on their own if they don’t happen to meet a person to whom they want to legally bind themselves.

Even though this is not a politicized movement, it has had profound effects on our politics.


While they are not often credited for it, single women’s changed circumstances are what’s driving a political agenda that seems to become more progressive every day. The practicalities of female life independent of marriage give rise to demands for pay equity, paid family leave, a higher minimum wage, universal pre-K, lowered college costs, more affordable health care, and broadly accessible reproductive rights; many of these are issues that have, for years, been considered too risky to be central to mainstream Democratic conversation, yet they are policies today supported by both Democratic candidates for president.

Prior to reading this article, it had actually never occurred to me that much of the agenda of the Democratic Party today is so profoundly feminist. That is a remarkable change that has gone largely unnoticed. It is also important to note that this agenda was not put on the table by our current presidential candidates. It was there for them to embrace long before they announced their intentions to enter this race.

As Stan Greenberg documented in his book, America Ascendant, this agenda is supported by the majority of Americans - regardless of their party affiliation. That is how it came to be embraced by Democrats prior to this presidential election and is likely to drive much of the debate going forward.

Of course there is a segment of the population that finds this agenda deeply threatening - exactly because it represents the kind of change to the social order of a bygone era. And so, much like the backlash we're seeing to the changing racial demographics, this one is facing a significant reaction from many conservatives. That is why I recently suggested that almost every issue in this election cycle can be seen through the lens of an old social order clamoring for a return to dominance as the organizing principle.

But as Traister suggests, our economic and social systems will have to adapt.


None of this is easy, or likely to happen quickly, especially not with a Republican-led Congress. But it is the beginning of a new kind of relationship between American women and their government. Single women are taking up space in a world that was not designed for them. They make up a new republic, a new category of citizen. If the country is to flourish, we must make room for free women, and let go of the economic and social systems built around the presumption that no woman really counts unless she is married.