Preserving National Monuments is Good for the Economy 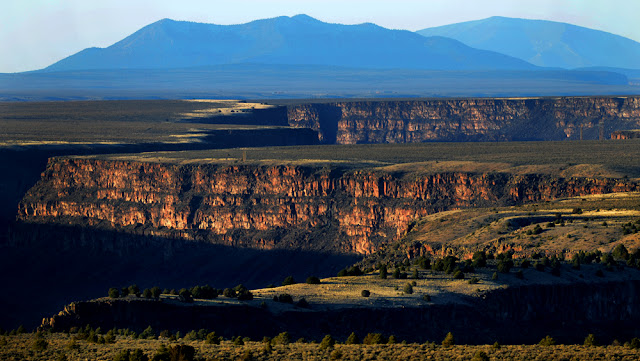 As I have noted previously, President Obama has used the Antiquities Act of 1906 to preserve over 260 million acres of land and water as national monuments - more than any previous president. The stunning vista in the photograph above comes from the Rio Grande del Norte National Monument, which was designated in March 2013. I have had the good fortune to visit this area on several occasions, and it is truly a remarkable place.


The monument includes an assortment of geographical attractions. The most prominent is the Rio Grande Gorge. The gorge is the result of a continental rift where two plates are separating at an extremely slow pace. This part of the Rio Grande has numerous hot springs and some class 5 rapids at the “Taos Box”. The gorge is home to bighorn sheep, river otters, beaver, ringtail, porcupine, bear, cougar, and many other species. The petroglyphs created by early Native Americans can be found on the rocks adjacent to the river. In addition to the Rio Grande Gorge, the monument includes Ute Mountain and San Antonio Mountain, both extinct volcanoes. A smaller gorge follows the Rio San Antonio to the west of the Rio Grande. The monument also includes open plains where elk and pronghorn antelope can be seen.

Preserving these natural wonders is what is often considered when they are designated as national monuments. Keeping them available for the public to visit and enjoy is also part of goal. But in what might be called a win/win/win, the Small Business Majority just released a report on how these newly designated national monuments are providing a boost to the local economies.

Maintaining public access is what provides opportunities for small businesses. Here is what the owner of Taos Fly Fishing Shop said about that:


I've been involved with the Rio Grande monument campaign for a few years on a volunteer basis. Now that it has been designated, we have seen a small increase in business. The vast majority of our guide business happens on forest service or BLM land. The thought of losing access to those is very troubling as it would certainly put us out of business.

I'm grateful that one of my favorite places on the planet will be preserved for future generations to enjoy. And it's nice to know that the Taos Fly Fishing Shop is benefiting as well.
Posted by Nancy LeTourneau