The Inherent Racism in Attacks on Biden's Commitment to Equity 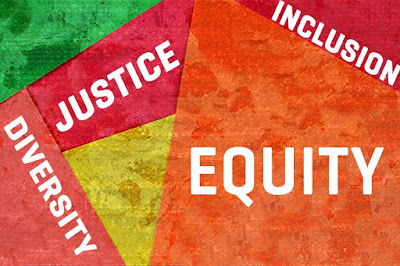 Right-wingers are freaking out these days over President Biden's emphasis on racial equity. They take issue with the fact that he isn't talking about equality of opportunity, but equity in outcomes. As an example, here is the New York Posts's editorial board in an article titled, "In push for woke 'equity,' Biden abandon's equality."

Notice that repeated word, “equity.” Liberals used to call (rightly) for equality of opportunity — to have every American treated the same way before the law. “Equity” demands equal outcomes. If some group of Americans is doing better than another, no matter the reason, government must fix it...

Per the White House, Biden is bent on “embedding racial equity across his administration’s response to COVID-19 and the economic crisis.” That extends to de-facto quotas for small-business support — making federal aid depend on skin color.

That’s un-American, but the White House said these steps are “just the start.”

That take is spreading across right-wing media, with a lot of references to a piece by Andrew Sullivan titled, "Biden's Culture War Aggression." In it, he fanned the flames with an allusion to the central theme embraced by racists: "The paradox, of course, is that to achieve 'equity' you have to first take away equality for individuals who were born in the wrong identity group." That perpetuates the "us against them" kind of thinking that is rooted in a zero sum mindset.

Years ago we began to see a cartoon that attempted to capture the difference between equality and equity.

While that helps move the ball forward in understanding the difference, I agree with Heidi Schillinger—founder of Equity Matters—that it is still problematic.

It is perpetuating the differences we are trying to address with equity are inherently biological. It continues this dangerous narrative that racial equity is “helping” people of color and communities of color because we are inherently and biologically deficient.

A focus on equity seeks to address the disparities that have been documented for people of color when it comes to everything from health to education to housing to wealth and involvement in the criminal justice system. Ignoring the impact of systemic racism on those outcomes reinforces a racism that is more subtle than simply calling someone the "n-word."

The subtle and insidious systemic racism wants us all to believe the reason race predicts these outcomes is because people of color don’t work as hard, don’t have as good of parents, don’t have enough grit, don’t spend enough time and money on the “right” things. This is why even in the name of “racial equity” schools, organizations, funder, government spend a lot of time trying to “fix” people of color and students of color. Teaching people of color to how write a resume or act in an interview. Or teaching students of color to have grit, better self-esteem, or social-emotional intelligence. Or philanthropic organizations to spend time teaching grassroots community of color organizations to write a grant or logic model. These are all important individual skills, but don’t address very real systemic barriers or biases based on race.

When it comes to the facts about racial disparities, we can chose to either blame them on some deficiency in people of color, or we can recognize the long-term impact of systemic racism. Those are the choices.

As Schillinger notes, there is nothing inherently wrong with programs that are committed to "fixing" people of color because they are an attempt to fill the gap in what has been missing. But a focus on equity isn't about "fixing" people of color. It is about dismantling the systemic racism that has disadvantaged them for generations. We can measure our progress towards that goal by determining whether our efforts have reduced the disparities in outcomes.

The consistent and systematic fair, just, and impartial treatment of all individuals, including individuals who belong to underserved communities that have been denied such treatment, such as Black, Latino, and Indigenous and Native American persons, Asian Americans and Pacific Islanders and other persons of color; members of religious minorities; lesbian, gay, bisexual, transgender, and queer (LGBTQ+) persons; persons with disabilities; persons who live in rural areas; and persons otherwise adversely affected by persistent poverty or inequality.

That first line is critical: "the consistent and systematic fair, just, and impartial treatment of all individuals." In other words, he's saying that "all lives matter." But to fulfill that ideal, we must ensure that "Black lives matter," and that everyone who has been "adversely affected by persistent poverty or inequality" is treated fairly. Contrary to what the New York Post's editorial board suggested, that captures exactly what it means to be American.