Why the Pot Is Lying About the Kettle Being Black 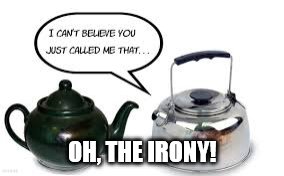 When former President Obama nominated Judge Merrick Garland to a seat on the Supreme Court, a group called the Judicial Crisis Network (JCN) spent $7 million to support McConnell in refusing to even hold hearings. Their message was, "let the people decide."

As Jay Michaelson wrote at the time, the whole campaign was ironic in that JCN was using dark money to keep an Obama nominee from being confirmed.

“Let the people decide” is the refrain of Republicans opposed to holding hearings for Supreme Court nominee Judge Merrick Garland, but they’re being bankrolled by an anonymous collection of billionaires—1 percenters so cowardly that they’re hiding behind tax laws to avoid revealing their identities.

Four years later, when Justice Ginsburg died less than two months before a presidential election, JCN did a complete reversal, pushing for the immediate confirmation of Trump's nominee—Amy Coney Barrett. That should give you some idea about the organization's lack of integrity.
But as Garland now faces confirmation hearings on his nomination to be Biden's attorney general, JCN isn't directly attacking him. Instead, their CEO, Carrie Severino, has identified 10 questions Garland should face during the hearings, all aimed a demonizing the woman Biden nominated to be associate attorney general (the number three spot at the Justice Department) - Vanita Gupta.
But that is just part of the assault JCN is waging against Gupta. Severino is going on right-wing networks to attack her and the organization recently released this ad calling Gupta "dangerous."
The ad contains three lies, which Ryan Reilly debunked.

As Politico reported, the article the Judicial Crisis Network ad cites to support its claim that Gupta favors defunding police “does not actually say that she favors defunding the police.” The claim that Gupta wants to “reduce sentences for white supremacists” comes as a voiceover atop an image of Dylann Roof ― the white supremacist killer whose prosecution Gupta oversaw while at the Justice Department. (The ad cites a letter ― sent by the Leadership Conference on Civil and Human Rights to Biden more than a month after Gupta took leave from the organization because of her nomination ― that calls for Biden to commute all federal death sentences. Such a commutation would “reduce” Roof’s penalty insomuch as it would condemn him to a natural death behind bars rather than death by lethal injection.) And her statement last summer that “COVID-19 is killing people in federal prison who could be released” is one that even former Attorney General William Barr would agree with.

But here's the real kicker. Severino and JCN are working with Heritage Action and Americans for Public Trust (all three dark money groups) to claim that Biden's nominees are payback to dark money groups for helping him get elected.

This would be the ultimate example of the pot calling the kettle black - if the kettle was, indeed, black. But it's not. To understand, it's helpful to know a bit about Gupta's background. After graduating from New York University School of Law, she worked for both the ACLU and served as Assistant Counsel at the NAACP Legal Defense and Educational Fund. Then, in 2014, Obama appointed her to be Acting Director of the Civil Rights Division at the Department of Justice. With the election of Donald Trump, Gupta left DOJ and became CEO of the Leadership Council on Civil and Human Rights. Since that organization isn't as well known as the ACLU or the NAACP, here is a summary about them from their web site.

The Leadership Conference on Civil and Human Rights is a coalition charged by its diverse membership of more than 200 national organizations to promote and protect the civil and human rights of all persons in the United States. Through advocacy and outreach to targeted constituencies, The Leadership Conference works toward the goal of a more open and just society – an America as good as its ideals.

The Leadership Conference is a 501(c)(4) organization that engages in legislative advocacy. It was founded in 1950 and has coordinated national lobbying efforts on behalf of every major civil rights law since 1957.

The Leadership Conference qualifies as a "dark money" organization based on its designation for tax purposes. But according to Open Secrets, it didn't report any outside spending in the 2020 election. Individual members or employees did, however, donate a whopping $4,829 directly to Joe Biden's campaign. In other words, JCN isn't just lying about Gupta's positions, they're lying when they suggest that her nomination as assistant attorney general is based on some kind of "pay for play" scheme.
Whenever I see this kind of blatant hypocrisy on the right, I am reminded of a column Steve Benen wrote back in 2011 titled, "Karl Rove and the affection for projection." He wrote that "More than anyone I’ve ever seen or heard of, Rove identifies some of his own ugliest, most malicious, most pernicious qualities, and then projects them onto those he hates most." Benen ended that piece by writing that "A lesser hack might find it difficult to launch political attacks that are ironic, wrong, hypocritical, and examples of projection, all at the same time, but Rove is a rare talent."
At the time, I doubt that Benen had heard of Carrie Severino or her accomplices at the Judicial Crisis Network, who could certainly give Rove a run for his money. But two recent events have exposed that organization to a bit of sunlight. The first came from Robert O'Harrow Jr. and Shawn Boburg of the Washington Post. They did an in-depth expose on the dark money groups assembled by Leonard Leo during his time at the Federalist Society. At the heart of those efforts is the Judicial Crisis Network.  Second came a presentation by Sen. Sheldon Whitehouse during the confirmation hearings for Amy Coney Barrett. He documented the three legs of the effort operating behind the scenes to remake the federal judiciary.
1. The Federalist Society - which screens and selects extremist judges,
2. The Judicial Crisis Network - which promotes the nominees, and
3. The myriad of organizations that file both court cases and amicus briefs to tell the judges what to do.
Whitehouse went on to explain that dark money from the same groups funded all three efforts.
Perhaps as a result of being so blatantly exposed, Leonard Leo resigned from his position at the Federalist Society (although he remains as co-chair of the board) and rebranded the former CRC Strategies—which had handled all of the media campaigns for Leo's myriad of dark money groups—to become CRC Advisors. As Leo told Jonathan Swan, it "will funnel big money and expertise across the conservative movement."
But if, as Deep Throat so famously counseled, you want to "follow the money," Leo has ensured that will be impossible to do. First of all, the funding for their efforts originates with dark money groups like Donors Trust. Secondly, as Swan reported, "Mueller and Leo say they plan to work with two existing non-profit groups, which will be rebranded as the Concord Fund and the 85 Fund, to funnel tens of millions of dollars into conservative fights around the country." Just try and follow the bouncing ball about those two nonprofits in this report from Open Secrets and the Guardian (emphasis mine).

In December, the Judicial Education Project formally changed its legal name to The 85 Fund, a group Leo backed to funnel “tens of millions” of dollars into conservative causes, according to Axios. The Honest Elections Project is merely a fictitious name — an alias — the fund legally adopted in February. The change was nearly indiscernible because The 85 Fund registered two other legal aliases on the same day, including the Judicial Education Project, its old name. The legal maneuver allows it to operate under four different names with little public disclosure that it is the same group...

The Honest Elections Project, which has been spreading lies about voter fraud in order to make the case for voter suppression, is also the Judicial Education Project and The 85 Fund. Whatever name they use, that organization is connected via Severino to the Judicial Crisis Network, or the Concord Fund.

With that information, we can finally connect the dots between the Judicial Crisis Network and Vanita Gupta. During her time as CEO of the Leadership Conference, Gupta prioritized lobbying for H.R. 1—otherwise know as the For the People Act—which would expand voting rights, election security, and campaign finance reform. That is precisely why she is being demonized by these right-wing groups. If confirmed, she is likely to go head-to-head with them on the issue of voting rights.

Karl Rove might actually be envious of the ability of Leo and Severino to "launch attacks that are ironic, wrong, hypocritical, and examples of projection, all at the same time."
at February 20, 2021