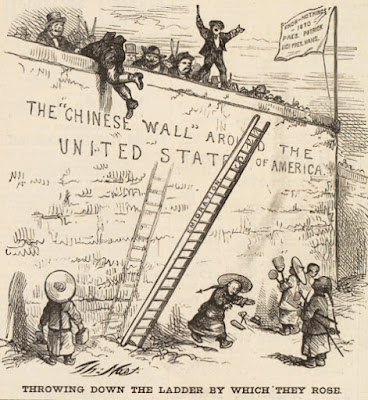 I recently watched a documentary series on Netflix titled, Amend: The Fight For America. Will Smith narrates the history of the 14th Amendment, specifically Section 1.

If you recall, that is the amendment Trump said he could get rid of with an executive order. But like so many other forms of nonsense that came out of his mouth, that was a lie.
As this series documents, the history of the United States has been a struggle to actualize the ideals set forth in the 14th Amendment. And, as we see today, that struggle continues.
It was in the midst of the episode on the 14th Amendment's impact on immigration that I first learned about the largest lynching in American history. It wasn't what I expected.
While trying to learn more about that incident, I came across a PBS documentary titled, The Chinese Exclusion Act.
I have to admit that, while I knew bits and pieces of this story, the overall look at this country's history with Chinese Americans was not only new to me, but I was astounded at how so much of what is happening today is echoed in this particular story.
For example, I was reminded of the fact that when Christopher Columbus stumbled onto these shores, he was in search of a trade route across the ocean to Asia—particularly China. While Nixon has been heralded for opening up our relationship to China after the communist revolution, not many of us know the role that Abraham Lincoln played in securing trade with China following the Opium Wars. In other words, trade with China has been a central focus of this country from the beginning
But it was in the demonization of the Chinese that so much of what we're hearing today had its origins. The lynchings discussed in the video above were part of a terror campaign waged against the Chinese in the West that resembles what happened to African Americans in the Jim Crow south.
The racist rhetoric we're hearing from right wingers these days about immigrants has its roots in these events from our past. That is important to know as conservatives launch an all-out demonization of China, which has led to a significant rise of hate crimes against Asian-Americans over the last year.
You'll need a Netflix subscription to watch Amend: The Fight For America, but The Chinese Exclusion Act is available on PBS's web site. I highly recommend these documentaries to everyone. I guarantee that watching them will not only make you smarter, they'll put what is happening today into historical context—which is always a good thing.
at March 07, 2021