On the Right Wing's Attempt to Cancel Wokeism 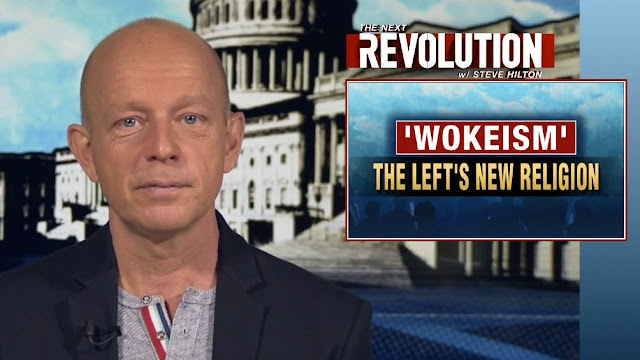 According to Steve Hilton, host of The Next Revolution on Fox News, the biggest threat facing this country is "wokeism." That means that it beats out things like climate change, income inequality, fascism, and even the latest obsession among conservatives...China.

Before delving into what Hilton had to say about "wokeism," lets keep in mind that he's also the one who picked up a conspiracy theory from WorldNetDaily which claimed that the coronavirus was created by research tied to Dr. Fauci.

Fox News is now claiming Dr. Fauci is responsible for the existence of COVID-19 pic.twitter.com/FBrnajMtFX

That is a lie.

On Sunday, Hilton suggested that wokeism is America's new religion.

This new religion is Wokeism. It has core beliefs like "the world is out to get you," "victimhood is sainthood," "if you are not a straight, white male you are oppressed."...

The punishment for nonbelievers: Canceled, cast out to the wilderness, financial and social ruin.

Like most arguments from conservatives these days, that is clearly a massive projection. But he did manage to get the right's favorite new word in there: "canceled."

I'm going to guess that from there, Hilton might have lost his Fox News audience when he became positively academic in reciting his version of the roots of wokeism. He traces it back to a group of Marxists (of course) in the early 20th century from the Institute for Social Research at the University of Frankfurt. They developed something called "critical theory," which eventually led to "critical race theory." The original is an approach to social philosophy that critiques society and culture in order to reveal and challenge power structures. According to its early theorists, it "may be distinguished from a 'traditional' theory according to a specific practical purpose: a theory is critical to the extent that it seeks human 'emancipation from slavery,' acts as a 'liberating … influence,' and works 'to create a world which satisfies the needs and powers of' human beings." But according to Hilton, it's nothing more than "an effort to tear down the values, ideals, and freedoms this country was built on."

In their view, family, faith, and culture were their building blocks of bourgeois society used by the elite to keep the masses oppressed, so they invented a new theory that explained all this and how to dismantle it -- Critical theory.

So according to Hilton, an effort to satisfy the needs and powers of human beings is seen as an attack on family, faith, and culture. But let's be perfectly clear. He's talking about a white patriarchal view of family, faith and culture. I was reminded of something Derrick Jensen wrote about how hatred becomes masked.

I'm also reminded of a profound comment from an anonymous blogger who went by the name keres.

And I would argue that to dismantle partriarchy you would need to dismantle society in it's totality, and start over. It's no good just letting women in as "pseudo men" to societal structures so long formed by and to men's wants and desires.

Back in my younger days, a process like that was referred to as "consciousness raising." Today we talk about "wokeism."

In a way, Hilton is right. "Wokeism" demands that we all contemplate the ways that biases have become embedded in our beliefs about family, faith, culture, tradition, economics, etc. That is what scares the shit out of people like Hilton.

On a lighter note, Clyde McGrady looked into the origins of words like "wokeism" and "canceled" and found that they originated (of course) in Black culture. Being "canceled" was first introduced in a song written by Nile Rogers, "Your Love is Canceled" about a date gone bad.  It later showed up in "New Jack City," a 1990s Black Gangster classic. Then it really caught on, showing up in songs by 50 Cent and Lil Wayne.

Here's the irony in a nutshell:

“Cancel” and “woke” are the latest terms to originate in Black culture only to be appropriated into the White mainstream and subsequently thrashed to death. Young Black people have used these words for years as sincere calls to consciousness and action, and sometimes as a way to get some jokes off. That White people would lift those terms for their own purposes was predictable, if not inevitable...

Terms such as “lit” and “bae” and “on fleek” — or, if you’re a little older, “fly” and “funky” and “uptight” — have been mined by White people for their proximity to Black cool. The word “cool” itself emerged from Black culture...With “canceled” and “woke,” there’s a twist: Not only have these words been appropriated from Black culture, but they have also been weaponized to sneer at the values of many young Black liberals.

So the very words Hilton used to describe what he views as the greatest threat we face were actually appropriated from the culture he wants to "cancel."