The KKK-ification of the Republican Party 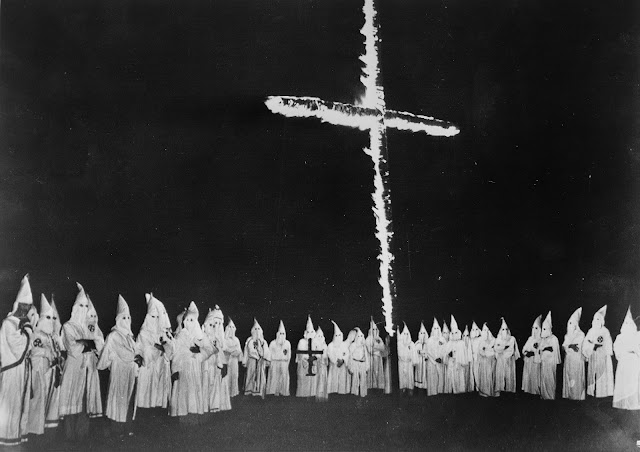 Tucker Carlson's recent defense of the Great Replacement Theory garnered a lot of media attention, including condemnation by the Anti-Defamation League. But it is spreading like wildfire on the right. Perhaps we shouldn't be surprise that Carlson's segment was heralded by the likes of Charlie Kirk and white working class defender J.D. Vance.  It is, however, worth noting that it has been picked up by Republican politicians.

During a hearing on the root causes of migration from Central American countries this week, Rep. Scott Perry (R-PA) said this:

“For many Americans,” Perry began, “what seems to be happening or what they believe right now is happening is, what appears to them is we’re replacing national-born American — native-born Americans to permanently transform the political landscape of this very nation.”

Sen. Ron Johnson (R-WI), who never met a conspiracy theory he didn't like, weighed in as well.

"This administration wants complete open borders, and you have to ask yourself why.

Is it really they want to remake the demographics of America, to ensure their -- that they stay in power forever? Is that what's happening here?" pic.twitter.com/kk6QwxQHI3

It is important to keep in mind that the Great Replacement Theory spurred killing sprees in Christchurch, New Zealand; Poway, California; and El Paso, Texas, indicating that this kind of rhetoric has the potential to be deadly—even as it becomes a mainstay of the Republican Party.

Following Carlson's recent use of the rhetoric, Fox Corp. stood behind their television personality. Perhaps that is because what he said has been repeated on that network many times. Take a look at this compilation put together by Media Matters almost two years ago.

They have recently updated that compilation.

It's not just Tucker Carlson. The racist "replacement" theory is all over Fox News pic.twitter.com/lF1azhzT2Y

While several "rationales" are used to justify this fear of "foreign invaders," the most common is that it is a ploy by Democrats to build their voter base, indicating that the Republican Party either can't or won't win their votes. That is despite the fact that pundits have been focusing on the increase in Hispanic support for Trump in 2020. One can only surmise that ginning up the racist fears of their white supporters is more important than garnering votes from immigrants or people of color.

This is how things work in the Republican Party these days. Toxic ideas are introduced on right wing media and eventually saturate their viewers sufficiently that elected Republicans pick them up. That is how the GOP became the party that openly embraces KKK ideology. The formation of an "America First Caucus" dedicated to protecting "Anglo-Saxon political traditions" is merely the next step in the process.

There are many things that have triggered this alignment of the GOP with KKK ideology. But white supremacists Richard Spencer articulated the reason for its most recent escalation back in 2015 (emphasis mine).

“Trump, on a gut level, kind of senses that this is about demographics, ultimately. We’re moving into a new America.” He said, “I don’t think Trump is a white nationalist,” but he did believe that Trump reflected “an unconscious vision that white people have – that their grandchildren might be a hated minority in their own country. I think that scares us. They probably aren’t able to articulate it. I think it’s there. I think that, to a great degree, explains the Trump phenomenon.”

The idea that white people will become a minority due to an "invasion" of foreigners immigrating to this country is—interestingly enough—not only racist, but a lie. Back in 2018, Trump proposed some drastic changes to our immigration system that were undoubtably crafted by white supremacist Stephen Miller. The Washington Post analyzed their impact and concluded that they would merely "delay the date that white Americans become a minority of the population by as few as one or as many as five additional years." Here's why:

[W]hile these effects of delaying the United States' diversification would be significant, they would not fundamentally change the country's demographic destiny. Experts say the main driver of diversification in the United States is the native-born Hispanic population, which grew by about 5 million from 2010 to 2016, just as the native-born white population shrank by about 400,000 over the same period, according to Census Bureau data...

“You can shut the door to everyone in the world and that won’t change,” said Roberto Suro, an immigration and demography expert at the University of Southern California. “The president can’t do anything about that. If your primary concern is that the American population is becoming less white, it’s already too late.”

Republicans can howl all they want about "foreign invaders," but this country's demographic destiny is already baked in the cake. The party of the KKK refuses to accept that, meaning that the next few years are going to be a pretty rocky ride.

I recently watched the movie, Son of the South, which is based on the true story of white civil rights activist Bob Zellner. I was particularly struck by a scene that happened early in the movie where Rosa Parks (played by Sharrone Lanier) offers a warning to Zellner (played by Lucas Till). It comes at about the 1:35 mark in this trailer.

Ms. Parks says: "There's gonna come a time when something really bad happens and you're gonna have to decide which side you're on. Not choosing is a choice."
History is about to repeat itself. One way or another, I suspect that every one of us will have to chose a side in this struggle, because not choosing is a choice.
at April 17, 2021