How the Failure of Bush's Presidency Led to MAGA 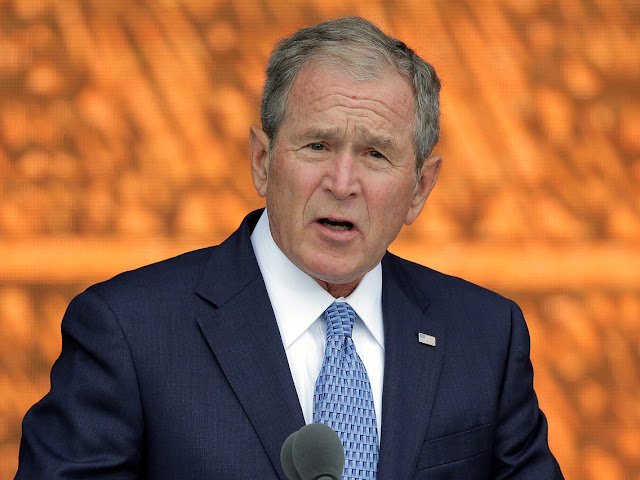 When the media started obsessing over the drop in Biden's approval rating - practically declaring him a lame duck president - I thought it would be interesting to look at what happened to the approval ratings of past presidents during their first nine months in office. I found exactly what I expected.

According the the aggregate of polls at FiveThirtyEight, Biden began with an approval rating of 53% and has dropped 8 points to 45%. Here's how it looks for previous presidents during their first 233 days in office:

George W. Bush's approval rating doesn't provide a good comparison because it skyrocketed about this time after the 9/11 terrorist attack.
What this data shows is that there is nothing unusual about a drop in presidential approval ratings once they stop campaigning and start governing.
But while I was looking at those numbers, I noted something else. When George W. Bush left office, his approval rating was historically low at 27.8. Of the previous 12 presidents, the only one who even comes close is Richard Nixon, whose approval rating was 24.8 when he resigned over the whole Watergate scandal. Even Trump ended his one term at 38.7. For other two-term presidents, Obama left office with a 54.8 approval rating, Clinton was at 63.2 and Reagan was at 63.1.
Even most Republicans disapproved of Bush's performance at the end of his second term. But that's hardly surprising - given the debacle of Katrina, the war in Iraq, and the collapse of the economy. On every front imaginable, GOP policies had been an abysmal failure.
It was in that context that we elected this country's first African American president - who exuded not only hope, but competence. He had gained notoriety for his speech at the 2004 Democratic Convention, where he said things like this:
In 2008 Democrats not only won the presidential race, they picked up 8 seats in the Senate and 21 in the House. In other words, Republicans were in deep trouble. Their policies had failed miserably, leading to a huge electoral loss. This was a critical moment for the GOP.
At that point, it would have made sense for Republicans to step back and re-examine their policy priorities, just as Democrats had done after the 1972 election. On the other hand, it wouldn't have surprised anyone if the GOP had simply doubled-down on their policy priorities with new messaging (ie, continue to be the post-truth party). They did neither. Michael Grunwald explained what they DID do:

That is how the GOP became the post-policy party focused solely on grievance politics and culture wars. In other words, it is why they went from the party of Ronald Reagan to MAGA nonsense.