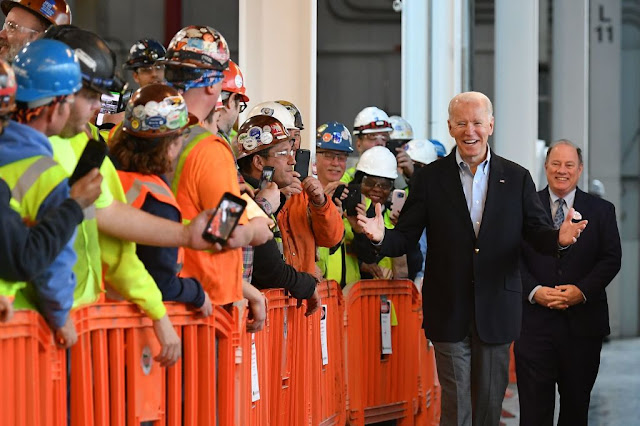 Frankly, I'm sick and tired of hearing that Democrats don't understand or care about working class voters. It is a refrain we've been hearing constantly - usually couched with claims that the party is either (1) beholden to their corporate donors, or (2) consumed with identity politics.

As things heat up over the Build Back Better bill, those claims are obviously nonsense. The legislation includes:

All of those would provide a huge financial boost for working class Americans. In addition, they would be paid for by raising taxes on the wealthy and big corporations. The same can be said for the infrastructure bill passed in November.

A $2 trillion jobs plan (of which $1.5 trillion will go to infrastructure) from the Biden-Harris administration would be good medicine to nurse the economic wounds inflicted by the COVID-19 pandemic. The infrastructure plan would create or save 15 million jobs over 10 years and would increase the share of infrastructure jobs from 11% to 14% of all jobs in this country, temporarily reviving the blue-collar economy.

In other words, Democrats are going all-in on programs that close the gap on income inequality and Republicans are fighting them every step of the way.

The one exception to that description is Senator Joe Manchin, who is currently siding with Republicans on taking a position against the BBB bill. Does anyone doubt that his opposition is welcomed by people like Mitch McConnell? If so, take a look at how the minority leader reacted.

Ironically, my wrap-up press conference at the end of the session last Thursday, I said the single greatest favor Joe Manchin could give the country is to kill this bill. That’s what the country needs, to see this bill killed. It is absolutely inappropriate and unnecessary at a time when we’re fighting inflation," McConnell said.

"It was an exciting thing to hear," he added. "It was a great shot in the arm for the country. I think it’s exactly what the country needed at this particular time."...

He remarked that Manchin’s status as a moderate has put him at odds with his own party and added that he would "certainly welcome" Manchin to join the Republicans.

"He doesn’t fit well over there, but that is a decision ultimately that he has to make. We certainly welcome him to join us if he was so inclined," McConnell said.

It isn't just Manchin's position on BBB that McConnell would welcome into the Republican Party. It is also his rationale that would fit right in.

In recent months, Manchin has told several of his fellow Democrats that he thought parents would waste monthly child tax credit payments on drugs instead of providing for their children, according to two sources familiar with the senator’s comments...

Manchin has also told colleagues he believes that Americans would fraudulently use the proposed paid sick leave policy, specifically saying people would feign being sick and go on hunting trips, a source familiar with his comments told HuffPost.

That tells you all you need to know about what Manchin thinks about his constituents. Is there anything more condescending a politician could say about Americans who are struggling financially? Keep in mind that those comments come from someone with a net worth of between four and thirteen million dollars, according to his Senate disclosures. That would qualify Manchin as one of those "elitists" who get criticized so often for being dismissive of working class Americans.

The fact is that the so-called "blue dog coalition" in the Democratic Party, which often catered to the interests of the donor class - even as they claimed to represent working class voters - has dwindled down to almost nothing. Joe Manchin is one of the last standing when it comes to that group. Representatives from so-called "swing districts," like Lauren Underwood, Sharice Davids, and Colin Allred, are all on board with the Democratic agenda in support of working class Americans.

It is true that Democrats are also the party of things like voting rights, immigration reform, and women's reproductive freedom. To the extent that those are opposed by some working class voters, the rift will remain. Most of the women and people of color who would benefit from those positions are working class too. I am reminded of something Ruth Bader Ginsburg said shortly before her death.

"There will never be a time when women of means will lack choice," Ginsburg told an audience at Georgetown University Law Center in 2015, because they could travel across state lines to obtain the procedure.
What concerned Ginsburg was the fate of women without means living in states hostile to Roe. "The women who won't have that choice are poor women," Ginsburg said. "That doesn't make a whole lot of sense."

So can we please stop with this kind of analysis:

Working-class people with less than a college degree have an outlook that differs from that of the educated professionals whose outlook has come to dominate the Democratic Party.

Our how about this one:

The Democrats, in Westwood’s view, must return to being a party of the people and not woke-chasing elites who don’t understand that canceling comedians does not help struggling Americans feed their children...Democrats need to stop wasting their time on cancel culture or they risk canceling themselves to those who live in the heart of this country.

I'd like to know who those "educated professionals" are who have "come to dominate the Democratic Party." They're certainly not the people fighting for BBB or the infrastructure bill. Also, when is the last time you heard a Democratic politician talk about canceling comedians? I suspect that those quotes come from elites who interact with the elites they're criticizing. Out here in the hinterlands, we have more important things to talk about - like passing the Build Back Better Bill.