What Happens When a Member of Congress Threatens Treason? 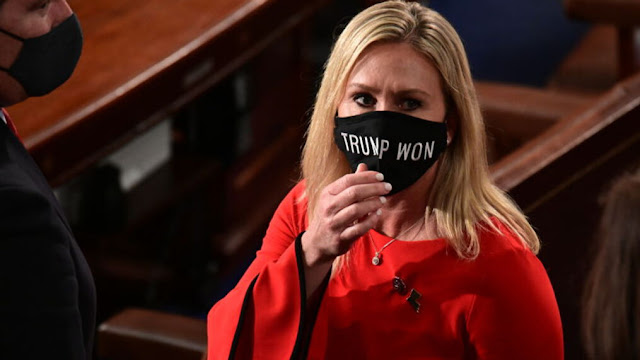 Rep. Majorie Taylor Greene has been threatening a "national divorce" between red and blue states over "irreconcilable differences."

Her threat turned into a Twitter trend on Wednesday when she took the whole idea a step further.

All possible in a National Divorce scenario.
After Democrat voters and big donors ruin a state like California, you would think it wise to stop them from doing it to another great state like Florida.
Brainwashed people that move from CA and NY really need a cooling off period. https://t.co/NB2dVj7n2X

Basically what she's saying is that, under a national divorce scenario, red states could decide that anyone who moved there from a blue state would be barred from voting during a "cooling off period."

I have one question for Rep. Greene: Would your home state of Georgia be one of those red states? In the 2020 election, 49.47% of Georgians voted for Joe Biden, 51% chose Raphael Warnock, and 49% voted for a Democrat in congressional races.

I realize that Greene isn't the sharpest knife in the drawer, but I don't think she's thought this one through. She could very well find herself living in "blue America" if her national divorce scenario actually came to pass.

On a more serious note, what we have is a member of Congress threatening secession, which is treason. House Minority Leader Kevin McCarthy has stayed silent as members of his caucus posted videos of killing their political opponents or called them terrorists. But even more damning is the fact that, at this point, he hasn't said a word about one of them threatening treason. That is how far down the rabbit hole the GOP has gone.

What the rest of us are left to contemplate is whether Greene represents the fringe right or the Republican base. Sen. Chris Murphy - who has never been known to be alarmist - weighed in on that question.

The most popular national Republicans are openly advocating for an end to American democracy.

In addressing the same question, the always level-headed Steve Benen wrote that "the line between the GOP mainstream and the GOP fringe has grown awfully blurry." When a member of Congress threatens treason and the leadership of her party stays silent, that might be the most optimistic take on where things stand.