I, For One, Take Senator Tom Cotton Very Seriously 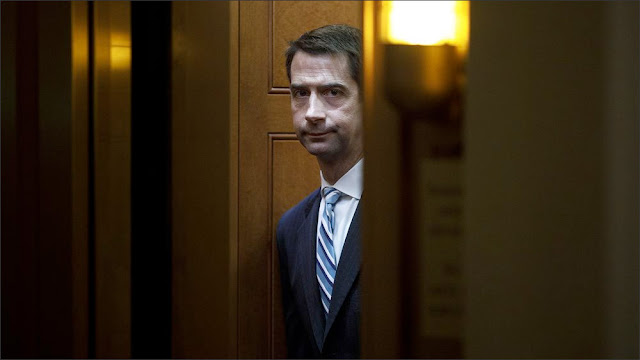 Becket Adams, who writes for the Washington Examiner, says that the media needs to take Senator Tom Cotton (R-AR) seriously, suggesting that "he is actually smarter and more reasonable than his critics say."

Given Cotton's track record, the "more reasonable" part is problematic. But I would be the last one to question the senator's intelligence, which is why I've always taken him seriously. Unlike Donald Trump, who combined his malevolence with ignorance, Cotton is smart and knows exactly what he's doing. He's the guy who graduated from Harvard in three years and then went on to get a degree from Harvard Law. That's impressive.

As Molly Ball wrote back in 2014, Cotton's undergraduate thesis at Harvard on the Federalist Papers gives us a window into a politician who is otherwise something of a cipher.

Cotton insists that the Founders were wise not to put too much faith in democracy, because people are inherently selfish, narrow-minded, and impulsive. He defends the idea that the country must be led by a class of intellectually superior officeholders whose ambition sets them above other men. Though Cotton acknowledges that this might seem elitist, he derides the Federalists’ modern critics as mushy-headed and naive.

Since Cotton still defends that thesis, it is clear that he, too, takes himself seriously as one of those "intellectually superior officeholders." That kind of elitism might not sit well with the fake populism espoused by his party these days. And yet, as Jeffrey Toobin noted, Cotton has somehow managed to garner support from both the insurgent and establishment wings of the Republican Party.

Stephen Bannon, Trump’s former top strategist and the chairman of the right-wing Web site Breitbart News, told me, “Next to Trump, he’s the elected official who gets it the most—the economic nationalism. Cotton was the one most supportive of us, up front and behind the scenes, from the beginning. He understands that the Washington élite—this permanent political class of both parties, between the K Street consultants and politicians—needs to be shattered.” At the same time, Cotton has maintained strong ties with the establishment wing of the G.O.P. Karl Rove, President George W. Bush’s chief political adviser, told me, “Cotton is not like a Steve Bannon, who wants to blow up the existing structure, uproot the ideology of the Republican Party and replace it with something new. He’s a rising star. He’s capable of building bridges within the Party. He wants to get things done.”

I would suggest that Karl Rove values Cotton for his extremely hawkish foreign policy positions. For example, the senator from Arkansas said that waterboarding isn't torture and that Gitmo detainees "can rot in hell."

Perhaps the position Cotton took on Iran's nuclear weapons is what distinguishes him the most. During his first year in the Senate, as the Obama administration was in the midst of multilateral negotiations to halt the country's development of nuclear weapons, Cotton penned an open letter the Leaders of the Islamic Republic of Iran basically telling them that they shouldn't take the negotiations seriously because either Congress or the next president could revoke any agreement that was ultimately reached. The freshman senator was able to get 46 of his Republican colleagues to sign the letter that undermined the foreign policy of a sitting president.

Cotton followed that up by defending his preferred method of addressing the issue of Iran's nuclear weapons: a few days of bombing...easy peasy. It's not hard to understand why those who were willing to lie this country into a war in the Middle East would love this guy.

It is Cotton's nativism that attracts the Steve Bannon's of the world. They love the fact that the senator not only fought against criminal justice reform, he actually said that this country has an under-incarceration problem. It was also Cotton who referred to slavery as a "necessary evil" and tweeted this during the protests over George Floyd's murder.

If local law enforcement is overwhelmed and needs backup, let's see how tough these Antifa terrorists are when they're facing off with the 101st Airborne Division.

We need to have zero tolerance for this destruction.

He went on to elaborate in an opinion column that was published by the New York Times.

Since his days in the House, Cotton has opposed comprehensive immigration reform. But it's worth noting that, in early 2018, Trump told lawmakers to seek a bipartisan solution on immigration and signaled that he would sign whatever they put in front of him.

A bipartisan group of Senators came up with a proposal that the president appeared to support. But when they arrived at the White House to discuss it, they were surprised to be met with several immigration hardliners (perhaps invited by Stephen Miller) who had already talked Trump into opposing the proposal. Of course, one of them was Tom Cotton. It was during that meeting that the president made his infamous remarks about immigrants from shithole countries.

Those are some of the policy positions taken by Senator Cotton. But the fact that he is a mean and spiteful person has occasionally been on display. For example, after Cotton was part of the group that ambushed the bipartisan immigration proposal, Republican Senator Lindsay Graham referred to him as "the Steve King of the Senate." Cotton fired back that, in his 2016 presidential run, Graham "didn’t even make it off the kiddie table in the debates.”

But the moment I began to see that Senator Cotton had sociopathic tendencies was when I read what he did to President Obama's nominee to be the U.S. Ambassador to Bahamas - Cassandra Butts. Frank Bruni told the story.

Senator Tom Cotton, an Arkansas Republican, put a hold specifically on Butts and on nominees for the ambassadorships to Sweden and Norway. He had a legitimate gripe with the Obama administration over a Secret Service leak of private information about a fellow member of Congress, and he was trying to pressure Obama to take punitive action. But that issue was unrelated to Butts and the Bahamas.

Cotton eventually released the two other holds, but not the one on Butts. She told me that she once went to see him about it, and he explained that he knew that she was a close friend of Obama’s — the two first encountered each other on a line for financial-aid forms at Harvard Law School, where they were classmates — and that blocking her was a way to inflict special pain on the president.

After waiting more than two years for Cotton to release his hold on her nomination, Butts died on May 25, 2016.

So yes Mr. Adams, I take Tom Cotton very seriously. As they say..."as serious as a heart attack."