What happened to Ciara Durkin? 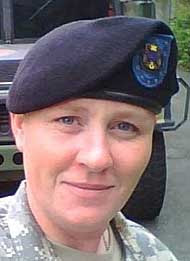 Here is a story that needs more attention. From The Patriot Ledger:

Ciara Durkin was home on leave last month and expressed a concern to her family in Quincy: If something happens to me in Afghanistan, don’t let it go without an investigation.

Durkin, 30, a specialist with a Massachusetts National Guard finance battalion, was found dead last week near a church at the Bagram Airfield in Afghanistan. She had been shot once in the head, the Army says.

Fiona Canavan, Durkin’s older sister, said today that when her sister was home three weeks ago, she told family members that she had come across some things that concerned her and had raised objections to others at the base.

‘‘She was in the finance unit and she said, ‘I discovered some things I don’t like and I made some enemies because of it.’ Then she said, in her light-hearted way, ‘If anything happens to me, you guys make sure it gets investigated,’’’ Canavan said. ‘‘But at the time we thought it was said more as a joke.’’

The family did not know what she was referring to, said Canavan, who lives in Quincy.

Canavan said that her sister was openly gay, but that the family had no specific reasons to think that had anything to do with her death.

Initially the Pentagon reported that Durkin, part of a finance unit deployed to Afghanistan in November 2006, had been killed in action, but then revised its statement to read she had died of injuries "suffered from a non-combat related incident" at Bagram Airfield. The statement had no specifics and said the circumstances are under investigation.

Durkin had a desk job doing payroll in an office about three miles inside the secure Bagram Air Base. About 90 minutes after she left work last Friday, her family says she was found dead near a chapel on the base with a single gunshot wound to the head.
...
The family doubts suicide, pointing to an upbeat "Happy Birthday" voicemail Durkin left for her brother just hours before she died.

"I thought it was cute at the time," Pierce Durkin said. "Now it's priceless."

I've read a few other reports, but there's not much else to add, other than that Senators Kerry and Kennedy as well as Rep. Delahunt are pushing for answers. The army has told the family that it could take 3 weeks to 3 months before the autopsy is released.

My purpose in posting this is to get the story out as widely as possible and let Ciara's family know "we've got their backs" in this struggle to find the truth. Please feel free to copy and past this anywhere you have access.
at October 05, 2007